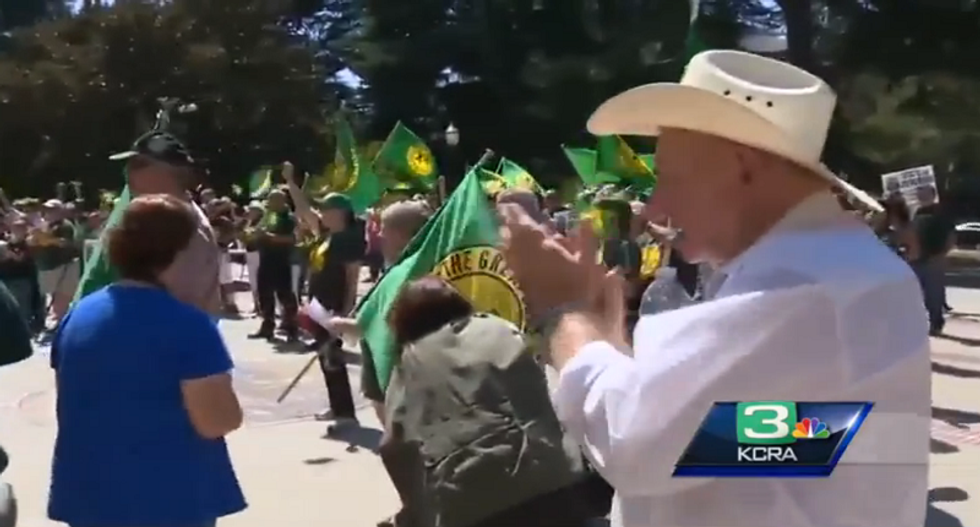 Residents in a rural Northern California county packed a local meeting Tuesday night over concerns that the state dominated by populous urban centers and Democrats doesn't represent them.

Citing concerns about gun control and immigration, El Dorado County residents told county supervisors they want to secede from the state and make a new one called Jefferson, the Sacramento Bee reports.

There was talk of revolution, over regulation, gun rights and immigration at the packed meeting that drew about 400, the Bee reports. A video posted to Facebook shows the El Dorado County government meeting room packed with people wearing green t-shirts with two "X" marks, the prospective Jefferson state flag.

One resident complained about having gun rights taken away.

"We cannot buy a hand gun that is available in 49 other states," he said.

The movement has the backing of the county sheriff.

"It’s about representation, pure and simple," Mark Baird, a spokesman for the Jefferson movement, said at the meeting.

Opponents to the movement, calling themselves "Keep It California," said secession from the massive state would be disastrous because the rural counties get more in services than they give in taxes.

"After partition, the new state would continue to be geographically isolated, sparsely populated and economically disadvantaged, lacking the resources to fund public education, social services, highways, parks, or law enforcement to anything approaching an acceptable modern standard," according to the group's website. "Without the protections provided by California’s landmark environmental laws, the region’s abundant natural resources would soon be gone forever."