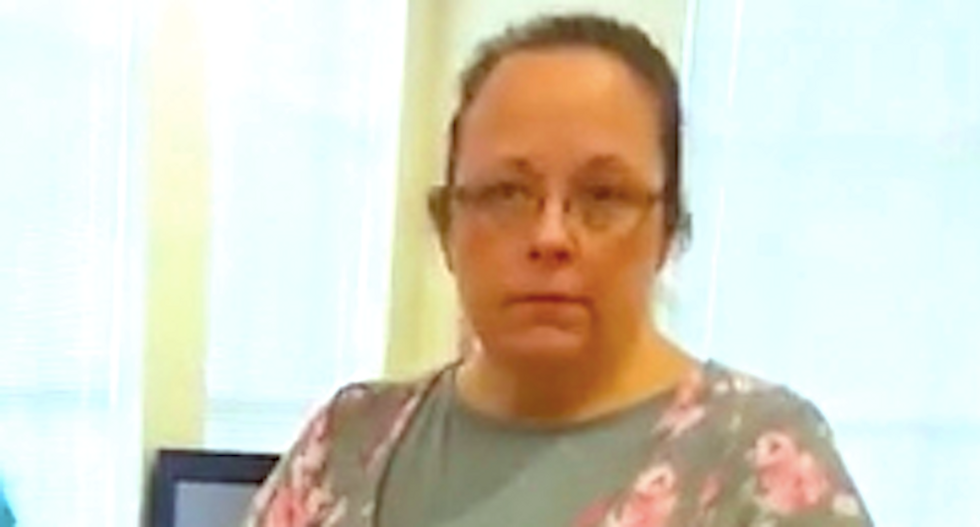 A court on Wednesday ordered a Kentucky county clerk who has refused to issue same-sex marriage licenses citing her religious beliefs to begin issuing the licenses.

Rowan County Clerk Kim Davis was sued in a class action after the Supreme Court issued its landmark Obergefell ruling after she was caught on video refusing to issue a license to David V. Moore and David Ermold in July. She claimed the ruling violates her Christian beliefs.

As reported by the National Law Journal's Mike Sacks on Wednesday, the 6th Circuit Court of Appeals ruled that in her role as county clerk, she or anyone in office must comply with the Supreme Court's ruling.

"In light of the binding holding of Obergefell, it cannot be defensibly argued that the holder of the Rowan County Clerk’s office, apart from who personally occupies that office, may decline to act in conformity with the United States Constitution as interpreted by a dispositive holding of the United States Supreme Court," the judge ruled. "There is thus little or no likelihood that the Clerk in her official capacity will prevail on appeal."

Earlier this month, Judge David Bunning granted Davis a stay, allowing her the chance to appeal before her office had to begin issuing the licenses.

"As the County Clerk for Rowan County, Kentucky, Davis’s official duties include the issuance of marriage licenses. In response to the Supreme Court’s holding in [Obergefell], that a state is not permitted 'to bar same-sex couples from marriage on the same terms as accorded to couples of the opposite sex,' Davis unilaterally decided that her office would no longer issue any marriage licenses," the court document reads.

Davis wasn't the only Kentucky clerk refusing to issue licenses. Casey County Clerk Casey Davis also vowed not to issue them, saying, "Nature’s law will supercede any law that man puts on a piece of paper."

Gov. Steve Beshear, a Democrat, had already ordered the clerks to comply with the Supreme Court ruling, but they were defiant.

The clerks could face jail time if they continue to refuse to issue the licenses after Wednesday's court ruling.