Donald Trump: King of the Fedorarati 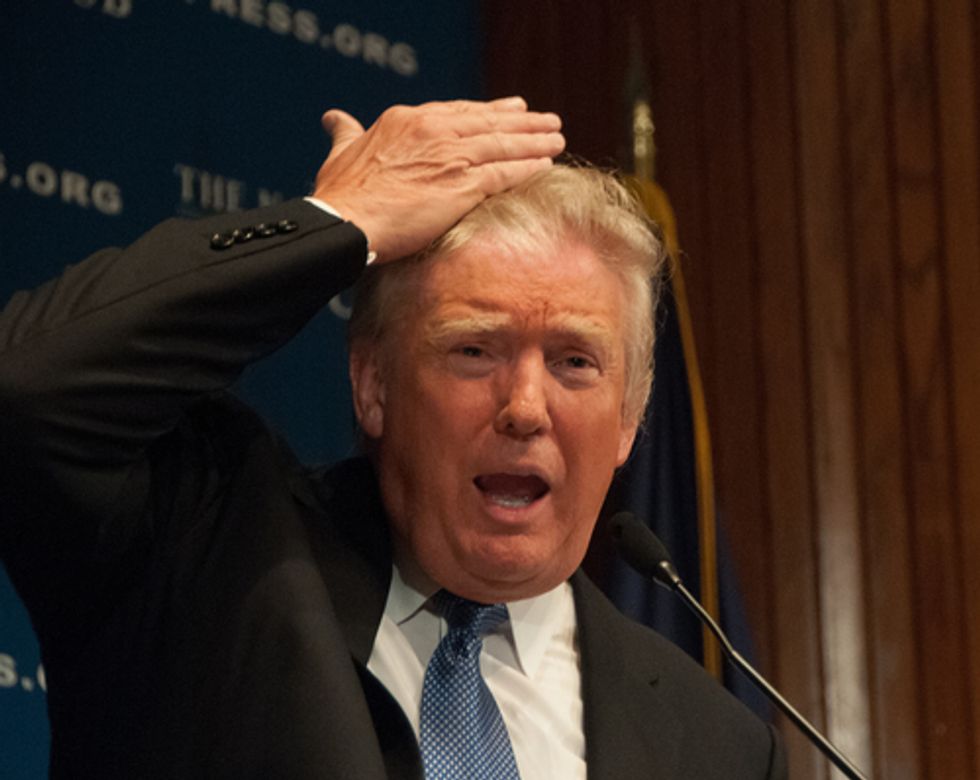 Donald Trump seems to realize, momentarily, that he's missing something. A fedora, perhaps?

If there's one thing I'm grateful to Donald Trump for, it's that he's single-handedly proving the relationship between benevolent sexism and more virulent misogyny. You often see sexists wield benevolent sexism---which they inevitably call "chivalry"---as a weapon to argue for the overall goodness of sexism. "What's wrong with a man who wants to pamper a woman and take care of her and open doors and pull out chairs for her and protect her from the evils of the working world and all the harshness of the 'male' world?" is usually how it goes. "We're just being nice! What's wrong with being cherished?"

It's an argument beloved of fedora-tipping M'ladies everywhere, and it was no surprise that Donald Trump would pull that card to defend himself against charges of misogyny, arguing that he can't be a misogynist because, "I cherish women. I want to help them."

Barbara Ellen of The Guardian has a great analysis of why this gambit is the red flag of the misogynist.

Getting away from Trump in particular, this “cherishing” schmaltz generally rings cacophonous alarm bells, saying as much about a man as if he’d appeared in the room wearing full Amish fancy dress. “Cherish” suggests a particular brand of skewed male mindset that many women would be familiar with. It denotes a fullblown “knight in shining armour” fantasy – but this time it’s certain men (strange and worrying men) doing all the fantasising … about themselves.

Women tend to feature only as delicate ultra-feminine flowers who must be looked after, helped, protected, rescued. And be fragrant, sexually attractive, possessed of fluffy hair, and above all silent (save for a bit of doe-eyed gasping) while it’s happening. It’s the stuff of fairy tales, Hollywood films, and now, it seems, a Republican leadership campaign. (Gruff voiceover):“I’m here, little ladies, there’s no need to be frightened any more”.

And if a woman refuses to play the role, by expressing an opinion, having ambitions of her own, or simply failing to be unimpressed by the cherisher?

The point being that if the cherished woman steps out of line, doesn’t kowtow enough, isn’t perma-sweet or sufficiently impressed, doesn’t bat her eyelashes so consistently and violently that she starts bleeding from the sockets, then it’s odds-on that sooner or later she will be pronounced “unfeminine” or a “man-hater”. Unfeminine man-hating women do not get cherished. “Cherishees” must painstakingly follow the woman-script the “cherishers” have so nobly written for them, or they will find themselves booted straight out of paradise. They may even be publicly accused of menstruating in a bad-tempered hormonal way while conducting their journalistic duty on a US news show.

This is what objectification is. Many people mistakenly think "objectification" is about looking at someone with lust, but it's not. Flirting, drinking someone in with your eyes, telling someone they look great, ripping someone's clothes off in a fit of passion: If it's consensual, have at it, folks. That is not objectification.

No, objectification is reducing someone to an object. One can reduce someone to a sex object, but there are other forms. You can reduce women to incubators, as anti-choicers do. Or you can reduce people to worker bees, as Amazon does. It's basically seeing other people as objects or toys, non-player characters whose only value is what they provide to you, the objectifying person. For the Nice Guy® who "cherishes" women, women are treated like trophies to be collected.

Which is why it's unsurprising to hear reports that Donald Trump decided that Princess Diana's divorce was all about him, and how he deserves to have a literal princess to add to his menagerie of lady-trophies to be "cherished". As David Ferguson at Raw Story reports, Diana's friend Selina Scott recalls that Trump pulled a full-blown Nice Guy® act on Diana after her divorce, trying to smother her in flowers until she caved and gave him what he wanted.

“He bombarded Diana at Kensington Palace with massive bouquets of flowers, each worth hundreds of pounds,” Scott said in the Sunday Times of London.

“As the roses and orchids piled up at her apartment she became increasingly concerned about what she should do. It had begun to feel as if Trump was stalking her,” she recounted.

Scott said that Diana asked her, “What am I going to do? He gives me the creeps.”

Classic Nice Guy® behavior: Treating women like they're a video game, and if you just hit the right combo, the prize will pop out.

Or in this case, assuming that if you just produce the "correct" number of flowers, then you will get what you want. The idea that relationships happen when two people choose each other doesn't register. Women are trophies to be won, and their opinion on the matter doesn't count.

As Ferguson notes, Trump seems to have admitted his creepy behavior, though he doesn't seem to grasp that it's creepy. (Nice Guys® never do!)

He wrote in his 1997 book The Art of the Comeback, “I only have one regret in the women department — that I never had the opportunity to court Lady Diana Spencer. I met her on a number of occasions. I couldn’t help but notice how she moved people. She lit up the room with her charm, her presence. She was a genuine princess — a dream lady.”

"I never had the opportunity." Notice how, even after his death, he refuses to give her any agency when it comes to her romantic life. He never won this particularly trophy because the amorphous "opportunity" never arose. It can't be because she didn't want him back. What women want is irrelevant. A woman is simply a puzzle and if you get the right combination of flowers and flattery, she pops right open and you win your prize. He characterizes their lack of a romance as his "regret", suggesting that if he had just applied himself harder or created more opportunities, then she would have been his trophy. The possibility that she had desires of her own that did not---let's be honest, could not---include fucking Donald Trump is not even considered. And even her death is about him. He's acting like she's a video game that got taken off the market before he could play it. Grooooossssss.

So thanks for that, Donald Trump. You're a gross asshole, but you are useful for illustrating exactly what is so fucked up about the Nice Guy® act. That's something, I guess.