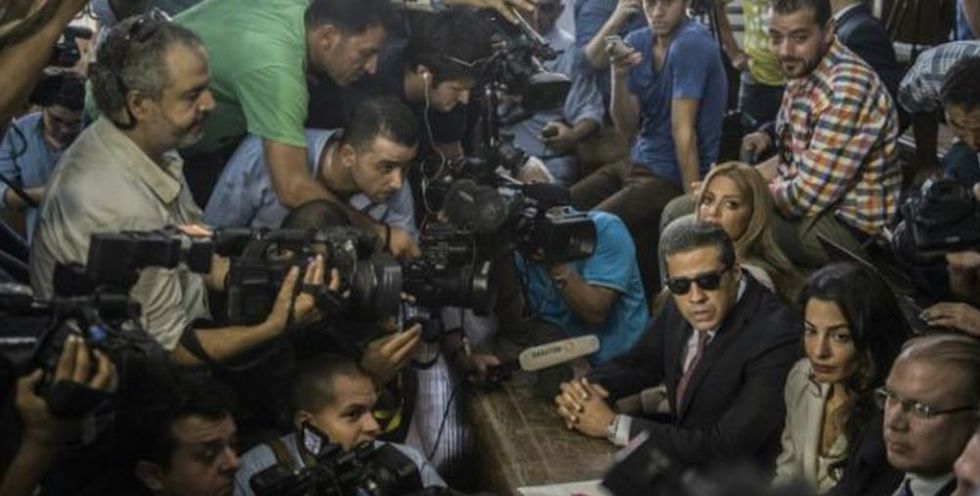 AFP/AFP - Al-Jazeera journalists Mohamed Fahmy (bottom, 3rd from R) and Baher Mohamed (center, 2nd from R), talk to the press during their trial in Cairo on August 29, 2015

An Egyptian court sentenced three Al-Jazeera reporters to three years in prison on Saturday, in a shock ruling that sparked international condemnation.

Canadian Mohamed Fahmy and Egyptian producer Baher Mohamed were in court for the verdict, while Australian journalist Peter Greste was tried in absentia after being deported early this year.

The court said they had broadcast "false" news that harmed Egypt.

Canada called for the "immediate return" of Fahmy, while Qatar-based Al-Jazeera denounced the verdict as an "attack on press freedom".

"It's a dark day for the Egyptian judiciary," Giles Trendle, the English channel's acting managing director, told reporters in Doha.

"Rather than defend liberty and the free and fair media, the Egyptian judiciary has compromised its own independence."

The retrial was ordered early this year after an appeals court overturned an initial sentence of seven years in prison, saying the prosecution had presented scant evidence.

Fahmy's lawyer, London-based Amal Clooney, told reporters she would press the presidency for a pardon.

"It's a dangerous precedent in Egypt that journalists can be locked up simply for reporting the news and courts can be used as political tools," she said.

Al-Jazeera's head of litigation, Farah Muftah, said in Doha the ruling would be appealed once the judge publishes the basis for his sentencings.

Relatives and supporters were dismayed.

"I'm shocked. Terribly shocked. We waited for an acquittal and then found ourselves stuck again in the case. This is illogical," Fahmy's brother Adel said.

"We did nothing wrong. The prosecution presented no evidence that we did anything wrong and so for us to be convicted as terrorists on no evidence at all is frankly outrageous," he said.

The journalists were arrested in December 2013, months after the military overthrew Islamist president Mohamed Morsi and launched a deadly crackdown on his supporters.

At the time, Qatar, which owns Al-Jazeera, was supportive of Morsi and his Muslim Brotherhood movement.

Judge Hassan Farid said Saturday that it was clear the reporters "were not journalists" and had broadcast "false news" while operating without a permit.

Mohamed received an additional six-month sentence for possessing a bullet he picked up while covering protest violence.

Fahmy and Mohamed, who were released on bail in February at the start of the retrial, were taken into custody.

Lynne Yelich, Canadian minister of state for foreign and consular affairs, called on Egypt "to use all tools at its disposal to resolve Mr Fahmy's case and allow his immediate return to Canada".

The trial has become an embarrassment for President Abdel Fattah al-Sisi, who as army chief ousted Morsi from the presidency in 2013.

Australian Foreign Minister Julie Bishop said she was "dismayed" by the outcome and the United States said it was "deeply disappointed and concerned".

"We urge the government of Egypt to take all available measures to redress this verdict, which undermines the very freedom of expression necessary for stability and development," State Department spokesman John Kirby said in a statement.

British Minister for Middle East and North Africa Tobias Ellwood said the sentencings would "undermine confidence in Egypt's progress towards strong long-term stability based on implementing the rights granted by the Egyptian constitution".

In the initial trial, two British Al-Jazeera reporters who had left the country were tried in absentia and sentenced to 10 years in prison.

A European Union statement called Saturday's sentences a "setback for freedom of expression in Egypt".

Sisi has said he wished the Al-Jazeera journalists had not been put on trial. He may pardon them if he chooses.

Fahmy, who gave up his Egyptian citizenship in hopes of being deported as Greste was in February, said ahead of the verdict that the trial was "politicised".

"If justice is to be served we should be acquitted as impartial journalists," said Fahmy, who formerly worked for CNN.

The three were accused of having supported the Brotherhood in their coverage. However, during the trial, the prosecution failed to find fault in their reporting.

"The technical committee that was appointed by the judge gave the court a report stating that none of our reports were fabricated," Fahmy said.

Al-Jazeera's Arabic channel had been supportive of Morsi and Islamists, but Fahmy, Greste and Mohamed worked for its English-language news channel.

Fahmy said they were "shocked" to discover during their trial that the broadcaster was unlicensed, when a prosecutor presented evidence to that effect.