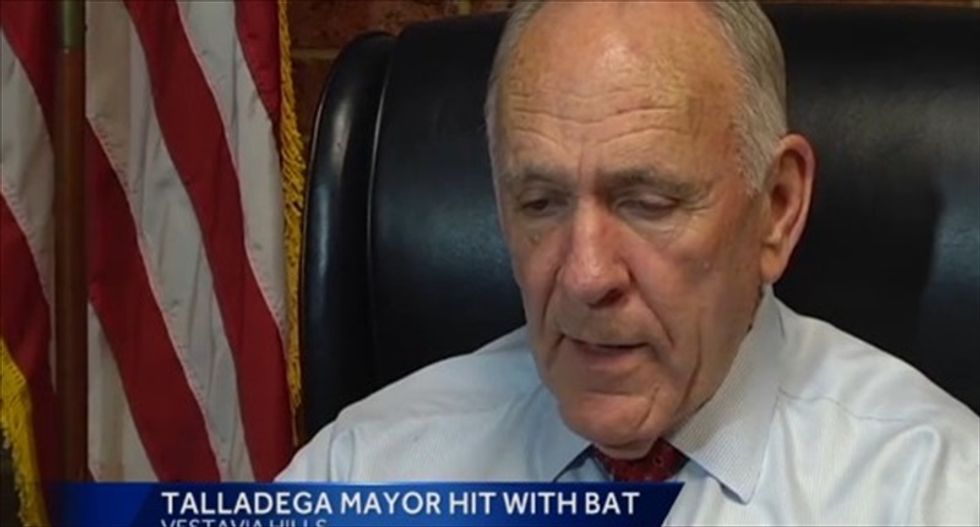 Authorities in Vestavia Hills, Alabama arrested a 71-year-old man in connection with an attack on the 75-year-old mayor of nearby Talladega outside a barber shop that was allegedly spurred on by an extramarital affair caught on video.

"Ain't no doubt about it," Mayor Larry Barton told Al.com. "If I hadn't kicked him twice in the b*lls I'd be dead. If he had been able to get me out of the car it would have been over."

According to Barton, the suspect, Benny Green, ambushed him while wearing a trench coat and a hood outside the shop around 7:30 a.m. on Saturday morning.

Barton told NBC News he identified Green -- a longtime friend and former co-host for his local TV program -- after pulling the hood off of him during the attack. Both men were hospitalized after the incident, but WVTM-TV reported on Monday that authorities then charged Green with first-degree assault.

Green's former attorney, Stewart Springer, told the Daily Beast that the suspect attacked Barton in retaliation for having sex with his wife inside Green's liquor store, an encounter he said was caught on video. Green and his wife are currently in the process of divorcing.

Springer also said that critics of the mayor are preparing to raise funds for Green's defense.

"I was glad [Green] attacked him," Springer said. "I gotta be careful what I say as a lawyer. From a personal standpoint, I wish he'd done it earlier. You take retribution on them. It's just the way you do stuff here [in the South]. We like it that way."

Barton has denied any romantic link to Green's wife. Police have only said that "domestic issues" were the cause of the incident.

The mayor was elected to his current term in office in 2011, 14 years after being released from federal prison. He was convicted for fraud and money laundering during his third term in 1994.