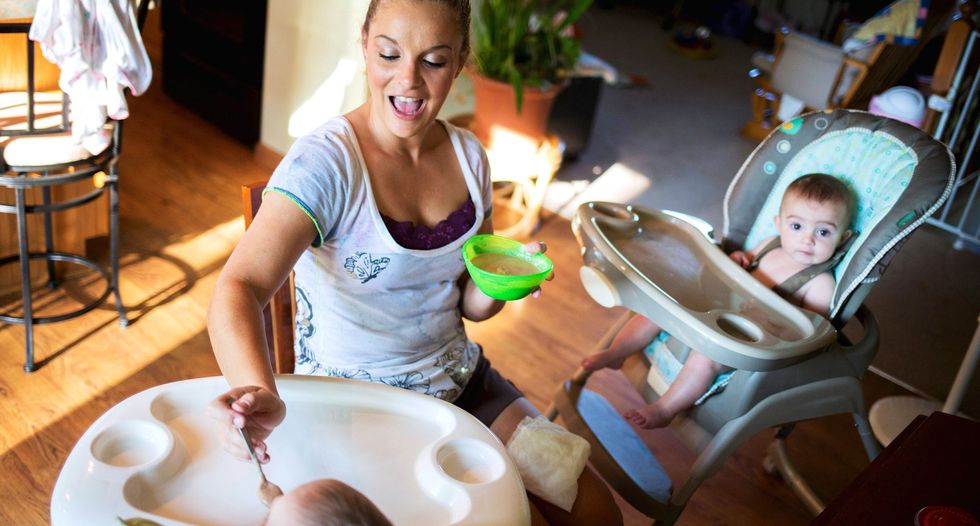 Bubbly and athletic, Heather Padgett, raised in a loving family in the Cincinnati suburbs, would not fit the stereotype of a heroin addict.

But the 28-year-old former administrative assistant's addiction was so bad, she used heroin while pregnant. Her twin girls were born nine months ago while she was in treatment, and they suffered tremors from withdrawal.

"I never thought I'd be pregnant and using drugs," Padgett said. Until she got clean last August, she was part of what the U.S. Centers for Disease Control and Prevention has called a heroin epidemic - a 100 percent rise in heroin addiction among Americans between 2002 and 2013.

The sharp rise in heroin addiction, coupled with the risks of newborns developing withdrawal symptoms after they are sent home, has led a group of Cincinnati hospitals to try what they say is the first program of its kind in the United States: testing all mothers, or their infants, for opiates regardless of background, not just those who seem high-risk.

The aim, they say, is to catch as early as possible any infants at risk of suffering from withdrawal because of their mothers' drug abuse. Known as Neonatal Abstinence Syndrome (NAS), infants can experience extreme irritability, poor feeding and diarrhea, all of which can show 48 to 96 hours after birth.

By that time, many have already been taken home, where they could have seizures, or suffer abuse from parents faced with inconsolable crying.

"The key thing we wanted to do is identify these infants early on," said Dr. Scott Wexelblatt of the Cincinnati Children's Hospital Medical Center.

Between 2004 and 2013, the national admission rate to intensive care units for NAS increased almost 300 percent to 27 cases per 1,000 admissions, according to a report in the New England Journal of Medicine.

Ohio has seen a 760 percent increase in the number of babies diagnosed with NAS between 2004 and 2013, and an average of five dependent babies were hospitalized every day in 2013, according to a Ohio health department report in July. The average cost is nearly $58,000 per hospitalization, which added up to $97 million in 2013, the report said.

Cincinnati doctors say key to their program's success is that women are not subject to criminal prosecution in Ohio if they test positive.

This is in contrast to Tennessee, Alabama and South Carolina, where women using illegal drugs during pregnancy can be prosecuted, according to Farah Diaz-Tello, a senior staff attorney for the Washington-based National Advocates for Pregnant Women. Attempts have also been made to criminalize drug use during pregnancy in five other states.

With the help of a state grant, Cincinnati hospitals moved from universal screening, which meant asking mothers questions to see if they might be using drugs, to universal testing, Wexelblatt said.

The idea is not without controversy. The American College of Obstetricians and Gynecologists recommends screening women for possible drug use, rather than mandatory testing. Diaz-Tello said there is a concern that if medical staff know a baby could be vulnerable to NAS, they may be more likely to see symptoms and overtreat.

She said the advocacy group also worried that test data could be used to bolster arguments for criminal laws.

But the Cincinnati hospitals found that one in four of the women who tested positive for opiates would not have been discovered through screening, Wexelblatt said.

"There can be a lot of denial," said Dr. Jim Greenberg, Cincinnati Children's director of neonatology.

Under the program, mothers are asked if they will submit to testing. Almost all agree, but if they do not, their babies are tested instead, meaning every mother or infant is tested before leaving the hospital.

The mothers who test positive are given information about opiates and their newborns are kept longer for observation, health officials said.

Babies suffering from opiate withdrawal are almost impossible to console. A training film used at Cincinnati Children's shows a baby trembling, flailing, screaming and knocking away its pacifier in a panic.

Megan Schaefer, a nurse at the hospital, said the staff try to get NAS babies into private rooms to reduce stimulus. They are swaddled tightly, and volunteer "cuddlers" come in to help nurses keep them content.

In the one-third of cases where non-drug measures do not work, the babies get methadone, and are gradually weaned. Drug treatment typically takes 13 days. Wexelblatt said any long-term effects are not yet known.

Parents meet with health and social workers about care for the babies, and mothers are referred for treatment if they are not getting it already. About 20 percent of babies are in a "safety plan" involving other helpers, such as a grandmother, and fewer than 20 percent go to foster care statewide, Wexelblatt said.

"Never let a baby slip through that could have been saved," said Dr. Michael Marcotte of Good Samaritan Hospital in Cincinnati, who works with addicted mothers and helped treat Padgett's addiction.