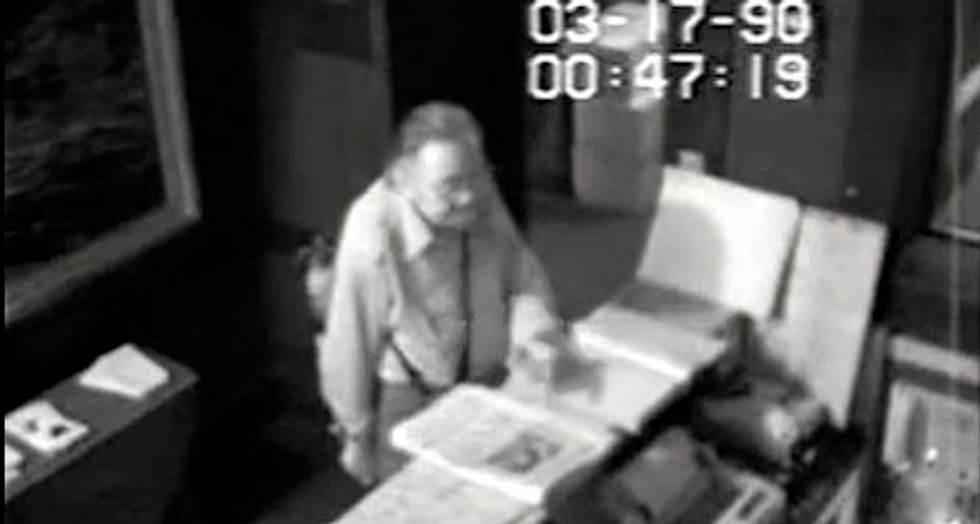 An unidentified man is seen allegedly being allowed inside the Isabella Stewart Gardner Museum in Boston, against Museum policy, by a security guard, in a still image taken from security video taken March 17, 1990 and released by the FBI August 6, 2015. REUTERS/FBI/Handout

Federal investigators in Boston on Thursday released 25-year-old surveillance video showing a security guard admitting a man to the Isabella Stewart Gardner Museum the night before it was robbed of $500 million worth of art in the largest such heist in U.S. history.

The six-minute, 40-second video shows a white man, wearing glasses and apparently in his 50s or 60s, being let in by the guard through a rear entrance to the museum shortly after midnight on March 17, 1990, about 24 hours before the heist.

The statute of limitations on the crime has long passed, meaning that if the thieves are found they will not face prosecution. But the FBI, the Boston office of the Justice Department and the museum hope to recover the art.

"This latest request for the public's assistance illustrates the FBI's continued commitment to the Gardner investigation," said Vincent Lisi, special agent in charge of the Federal Bureau of Investigation in Boston. "By releasing this video, we hope to generate meaningful leads and ultimately recover the stolen artwork."

The newly released grainy video shows a car pulling up to the museum that matches the description of a vehicle spotted outside shortly before the heist.

The theft occurred when two men dressed as police officers were admitted by security guards to the museum in the early morning hours of March 18, 1990. They allegedly went on to overpower the guards who were found duct-taped to chairs in the museum's basement the next morning.

Works of art including Rembrandt's "Storm on the Sea of Galilee," Vermeer's "The Concert" and Manet's "Chez Tortoni," were among the 13 pieces stolen from the museum, which features the collection of the eccentric Boston socialite Gardner.

Due to a quirk in Gardner's will, the empty frames from which the paintings were cut still hang on the museum's walls.

The video is one of several avenues investigators are pursuing in their attempt to recover the art.

They also have filed a gun charge against Robert Gentile, 79, of Connecticut, who has a criminal record dating to the 1960s and in whose home FBI investigators found police uniforms and a handwritten list of the stolen art.

Gentile contends he has been arrested twice in an attempt to extract information about the heist but says he knows nothing.