Fear, mistrust linger in Ferguson despite reform efforts by police 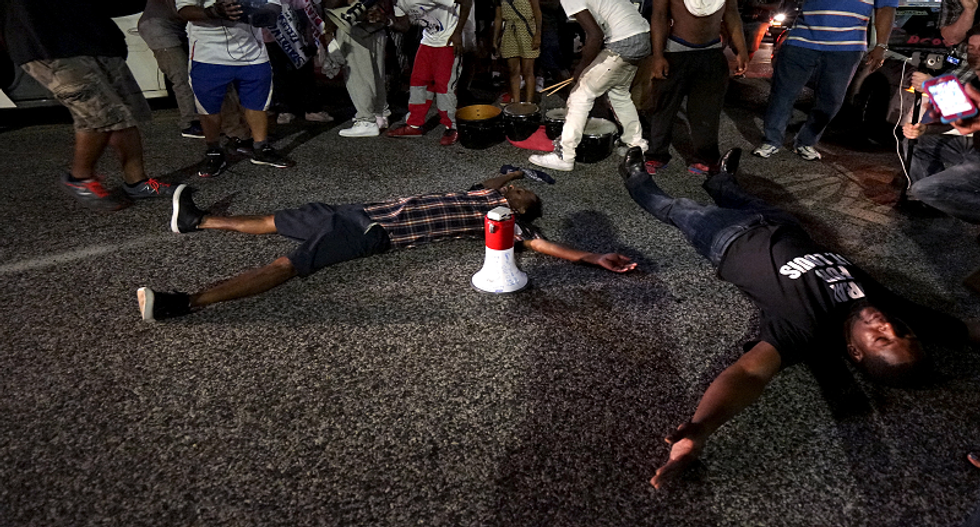 Protesters lie down in the street in a "die-in" outside the police department in Ferguson, Missouri August 7, 2015. REUTERS/Rick Wilking

The scene outside the Ferguson Police Department in Missouri on Friday night was familiar: A crowd of 300 protesters, angry over last year's fatal police shooting of an unarmed black teen, went toe-to-toe with a line of officers, screaming profanities.

But unlike last summer, when police responded to even peaceful protests with batons, tear gas and rubber bullets in the aftermath of rioting and arson that tore apart the St. Louis suburb of 21,000 people, this time officers watched quietly but did not respond.

"They were in our face, but we didn't react," said Ferguson police Sergeant Dominica Fuller, clad for Friday night's police work in a polo shirt bearing the phrase "community engagement team" rather than the body armor and riot helmets common in the unrest following the death of 18-year-old Michael Brown on Aug. 9, 2014.

"Our job now is to listen," said Fuller, one of five black officers on the 50-member police force who in May became the city's first black female police sergeant.

Brown's fatal shooting by white Ferguson police officer Darren Wilson was one of a series of police killings over the past year that provoked an intense debate on race, justice and policing in the United States.

The scenes of protests marked by periods of violence that played out in Ferguson last summer and again in November when a grand jury found Wilson had broken no laws in shooting Brown were repeated in cities including New York and Baltimore following similar killings of unarmed black men by white officers.

The depths of Ferguson's policing problems were laid bare in a scathing Justice Department report issued in March that accused the department of illegal and discriminatory enforcement actions that particularly exploited African-Americans.

Friday's restrained response by Ferguson police served as an illustration of what city leaders said are their efforts to improve relations between the still majority-white police force and the city's population, which is two-thirds black.

Anthony Gray, a lawyer for the Brown family, said he was pleased to see a number of changes at the police department, particularly the appointment of an African-American chief of police, even though it is only an interim appointment.

"They've made some good positive steps in the right direction," Gray said. "Ferguson seems to be taking the attitude that they want to do some internal adjustments to kind of meet those community needs."

Despite a range of reforms that include de-escalation and anti-bias training, minority recruitment and promotion efforts, and pleas by supervisors for officers to "be professional at all times" many Ferguson residents say they still fear and distrust the city's police.

Andrea Walker, 25-year-old black Ferguson resident, said she thinks fear of the police is worse now than it was a year ago. She said she believes many police officers are trying to overcome those fears, but face an uphill battle.

"Every black person I know has a fear of police," said Walker, a married mother of two.

She was one of roughly 20 Ferguson residents interviewed in recent days who described themselves as wary of police. Many declined to be named, out of fear of attracting unwanted police attention.

Walker said she was recently pulled over for speeding by a Ferguson police officer and was surprised when the officer seemed to go out of his way to be non-threatening and let her off with a warning.

But she still advises her 13-year-old stepson never to agitate a police officer for fear of what the officer might do.

Fuller, who has spent 17 years on the Ferguson force, said the department is well aware that it will take time to heal the deep wounds.

"A lot has changed. But there's still people that are still hurt and angry. It's not going to be overnight for healing," she said. "It's going to take some time. But we're working on that."

One key effort at reform - the recruitment of minority officers - is largely failing, she admitted.

At least one black officer quit the force after Brown's shooting and others have shied away due to the negative attention the department has received, said Fuller. The city has started a program to pay for black police candidates to go through the police academy, but has struggled to find any takers, she said.

"There's not a lot of minorities that want to be police officers, let alone in the city of Ferguson," said Fuller.

Officers are being trained to be more "compassionate," to offer warnings instead of traffic tickets if the circumstances allow for it, and to spend more time at community events.

On Saturday, as a crowd marched for miles, police monitoring the demonstration handed out water bottles and popsicles to the protesters.

They are also inviting area teens on "ride-alongs" to learn what is involved in policing and have started distributing literature about community programs at a farmer's market.

Mary Chandler, a 37-year-old black Ferguson resident, said she has seen a "180-degree change" for the better in the city's police.

"It used to be aggression, zero tolerance," said Chandler. "Now they are more tolerant. They are listening to us."

Angelique Kidd, a 42-year-old white Ferguson resident, said she has seen Ferguson police mistreat the city's black residents for years, but was heartened by the changes she has seen.