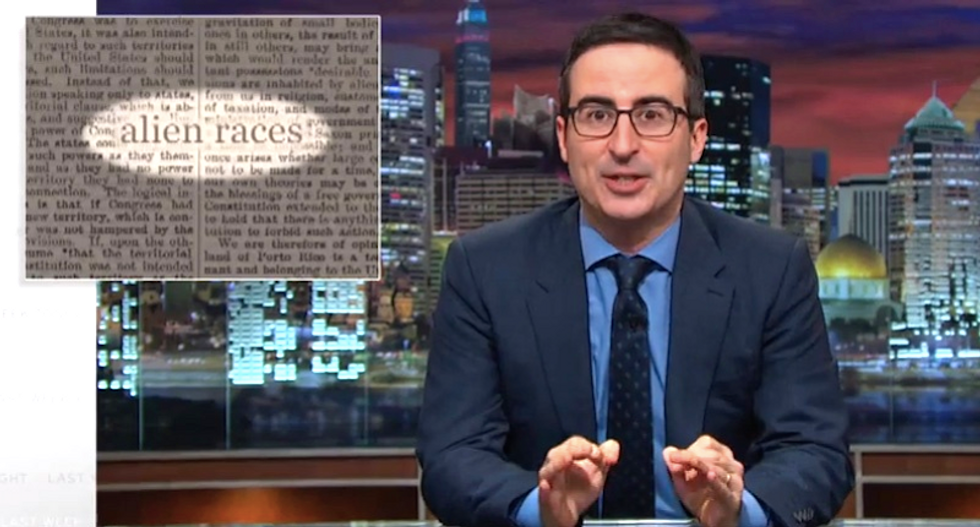 A federal judge cited John Oliver in her ruling against Guam in a tax refund case.

Ninth Circuit Judge Marsha S. Berzon included a footnote that cited a segment on U.S. territories from Oliver's HBO program, reported the blog Above The Law.

The segment, which aired in March, addressed the "shameful" legal status of citizens in Guam and American territories, such as Puerto Rico and the Virgin Islands.

“Because of their status as non-citizens, any veterans have to carry around the humiliating reminder that they are not equal in the eyes of the law,” Oliver said.

Berzon ruled against Guam in the class action lawsuit, but she cited Oliver's comments on "insular cases" -- a series of cases that established that constitutional rights do not automatically apply to citizens of U.S. territories.

“We do note, however, that the so-called 'Insular Cases,' which established a less-than-complete application of the Constitution in some U.S. territories, has been the subject of extensive judicial, academic, and popular criticism. See, e.g., Juan Torruella, The Insular Cases: The Establishment of a Regime of Political Apartheid, 77 Rev. Jur. U.P.R. 1 (2008); Last Week Tonight with John Oliver: U.S. Territories, Youtube (Mar. 8, 2015), the judge wrote in the footnotes to her ruling, which included a link to the YouTube video of Oliver's comments.

Watch the segment cited by the federal judge: