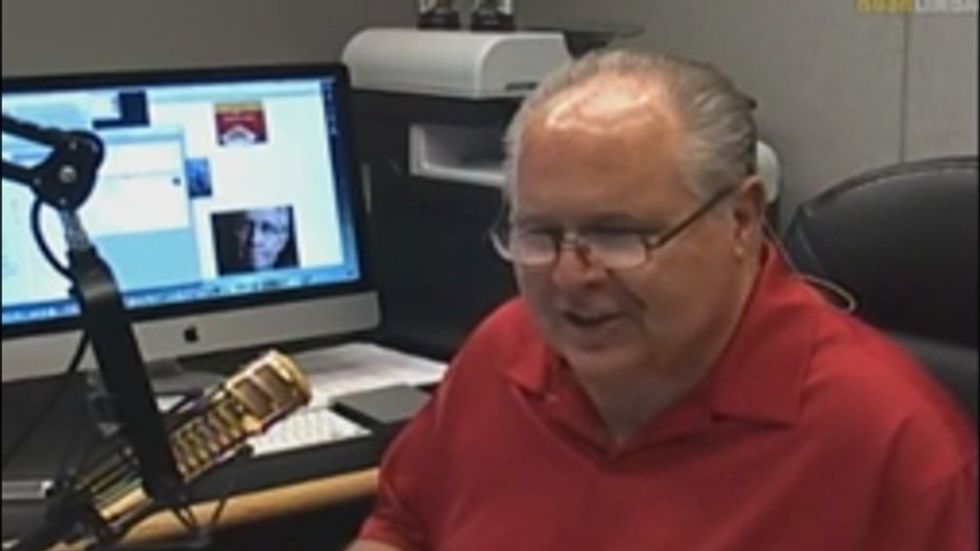 As unbelievable as it sounds, Rush Limbaugh got his major break after someone ELSE lost his job for saying something offensive. That someone else was Morton Downey Jr. and the term he used pales in comparison to the racist, sexist and hateful vitriol Limbaugh spews today.

In 1984  NewsTalk 1530 KFBK host Morton Downey Jr. told a racist, unoriginal and unfunny joke on air that involved the word "Chinaman" and a punchline based on how the inversion of "R" and "L" can turn "surprise" into "supplies." When City Councilman Tom Chinn called into the show to register his concern with the use of the term Chinaman, Downey Jr. refused to apologize. The next day, however, he held a press conference, apologized and announced he was resigning.

The man who would replace Downey Jr. was Rush Limbaugh, who, of course, has far surpassed Downey's hatefulness. I'm not sure if Chinaman is in Limbaugh's repertoire but he more than makes up for it, if it's not. Limbaugh did mock the speech  of Chinese president Hu Jintao, which he paraphrased as, "Ching cha. Ching chang cho chow. Cha Chow. Ching Cho. Chi ba ba ba. Kwo kwa kwa kee. Cha ga ga. Ching chee chay. Ching zha bo ba. Chang cha. Chang cho chi che. Cha dee. Ooooh chee bada ba. Jee jee cho ba."  He called Georgetown student and birth control advocate (I can't believe we need these in the 21st century) Sandra Fluke a slut, though the attack was much more embarrassing for him than for Fluke. Limbaugh's claim that Fluke was having "so much sex" that she couldn't "afford her birth control" revealed that Rush didn't understand how birth control worked and clearly thinks that women use the pill the way he uses his Viagra pill. And, of course, he's fond of calling the U.S. President Barack Obama the "magic negro."

As for Mort Downey Jr., he would go on to establish himself as a pioneer of the trash television genre on his TV show The Morton Downey Jr. Show. I spoke to Jeremy Newberger, the director of Evocateur: The Morton Downey Jr. movie, which had its television premiere on CNN this week,  on my radio show on Wednesday. We talk about Downey's politics, how he went from being a friend of the Kennedy's to a rabid right winger, and play a clip from his show when he calls Al Sharpton a "fat clown" and threatens to "puke" on the "slime" that is Ron Paul.

You can hear the whole episode, which includes a discussion of anchor babies, Bob Menendez's soul, a recording of Bill O'Reilly reading his own erotica, and an interview with Sarah Jaffee on Black labor organizers and police unions. You can subscribe to The Katie Halper Show on Itunes.