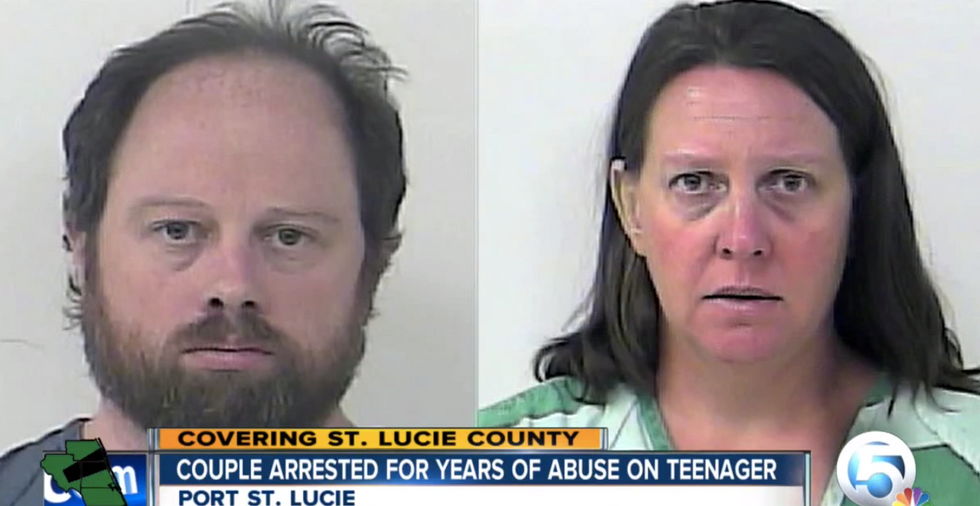 A 21-year-old Indiana woman has accused a couple who she lived with in Port St. Lucie, FL of physically and sexually abusing her for five years and using scripture from the Christian Bible's Old Testament to justify it.

WPTV News reported that the accuser says that she was sent to live with Rob and Marie Johnson after the death of her mother nine years ago. The then-13-year-old was sexually abused by Rob Johnson virtually from the day she arrived in the home.

Detective Daniel Herrington of the Port St. Lucie Police Department told WPTV that the woman first went to the police in Indiana where she lives now.

Rob and Marie Johnson reportedly believe in Old Testament law regarding marriage, under which a man can have many wives who are ultimately his property. The girl was ordered to call Jeff "Master" and to submit to his and Marie's sexual advances whenever they ordered her to.

The Johnsons reportedly preyed on the young girl's fear of being abandoned by telling her that if she wanted to be part of their family, she had to have sex with them.

"If she did not, the threat was that she would be turned over to state custody,” Herrington said.

Marie and Rob Johnson are charged with two felony counts of sexual assault against a child. They were arrested on Tuesday and released on bond Wednesday morning.

[hat-tip to Hemant Mehta at Patheos]

Marty Schladen, Ohio Capital Journal
CINCINNATI — In June of 2019, Ohio Attorney General Dave Yost thought a proposed utility bailout was a bad law, but he didn’t publicly oppose it because of support he’d received from the bailout’s primary beneficiary, FirstEnergy, according to lobbyists’ text messages displayed in court on Friday.

Prosecutors displayed the messages as part of the racketeering trial of former House Speaker Larry Householder and Matt Borges, a former Ohio Republican Party Chairman who was acting as a lobbyist at the time the utility bailout was debated and passed. They are accused in a scheme to use $61 million to make Householder speaker in 2019 so he could pass and protect a $1.3 billion bailout that mostly went to protect FirstEnergy’s failing nuclear and coal plants.

In another development Friday, FBI Agent Blane Wetzel revealed the origin of the investigation and how Householder’s bad timing played into it.