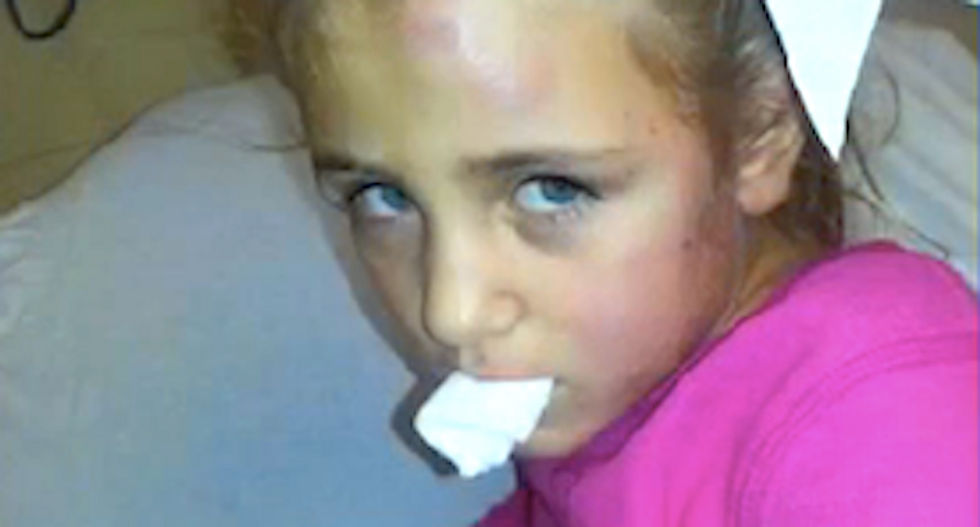 Girl whose teeth were removed by Florida dentist (WJAX)

A Florida dentist is accused of unnecessarily pulling children's teeth and ripping off Medicaid for millions of dollars.

Protests have raged for three weeks outside the Jacksonville offices of Dr. Howard Schneider after he was served with 58 notices of intent to sue -- which the dentist threw to the ground and fled in his vehicle after trying to grab a journalist's camera.

Former patients have accused the 78-year-old Schneider of performing unwanted and unneeded dental procedures -- and the Florida Attorney General’s Office has opened a Medicaid fraud investigation of claims that date back decades, reported WTVR-TV.

The lawsuits and investigations were launched after Brandi Motley posted a photo of her 6-year-old daughter on Facebook in May accusing the dentist of pulling seven teeth from the girl's mouth after ordering her from the examination room.

“The nurse suggested that it’s best, that kids act better when parents aren’t in the room, so they said, ‘We don’t like parents back here for the procedures,” Motley said.

Motley said she waited three hours before a nurse warned her daughter had been involved in an "incident" -- and she found the girl hyperventilating and covered in blood.

“She takes her gauze out and I notice that all of her teeth were gone,” Motley said.

The girl said Schneider hit and choked her before pulling her teeth, and Motley called police twice -- but the Jacksonville Sheriff's Office said no report was filed in the case.

After her story went viral, another woman recognized Schneider as the same dentist who removed two of her partially blind 5-year-old son's teeth after he came in for a crown.

Amanda Barry, who is deaf, said the boy told her the dentist choked him as he screamed for his mother.

“That’s what bothers me the most," Barry said. "Because I’m deaf, I can’t hear anything, and to know that my child was calling for me and my name and I couldn’t help him, it makes me feel, like, lousy. It makes me feel lousy."

State records show Schneider has received nearly $4 million in Medicaid reimbursements in the past five years, and an attorney for the families said the dentist preyed on poor families to defraud the government.

Schneider settled a 1995 malpractice lawsuit out of court, agreeing to pay $7,500 to the family of a 3-year-old boy who claimed the dentist placed 16 unnecessary crowns in the child's mouth.

A second malpractice case was filed that same year, but those documents have since been destroyed so the outcome isn't clear.

The mother of a 5-year-old girl filed a police report two years ago accusing Schneider of grabbing and slapping her daughter's face several times, but the dentist was never arrested or charged.

Sarris said, in many cases, the dentist never even performed the procedures the patients' parents requested.

Schneider remains free and his dental license remains clear, but he said he was moving his practice and home to Charleston, South Carolina, where his wife is from -- but Sarris said that decision was surprising.

"I'm surprised he is moving with his wife, whom he just divorced," Sarris said. "Sounds like he's running to me."

Another attorney who represents some of Schneider's former patients also plans to sue the dentist -- who bristled at the accusations.

"I am sick of it," Schneider said. "I have done nothing wrong."