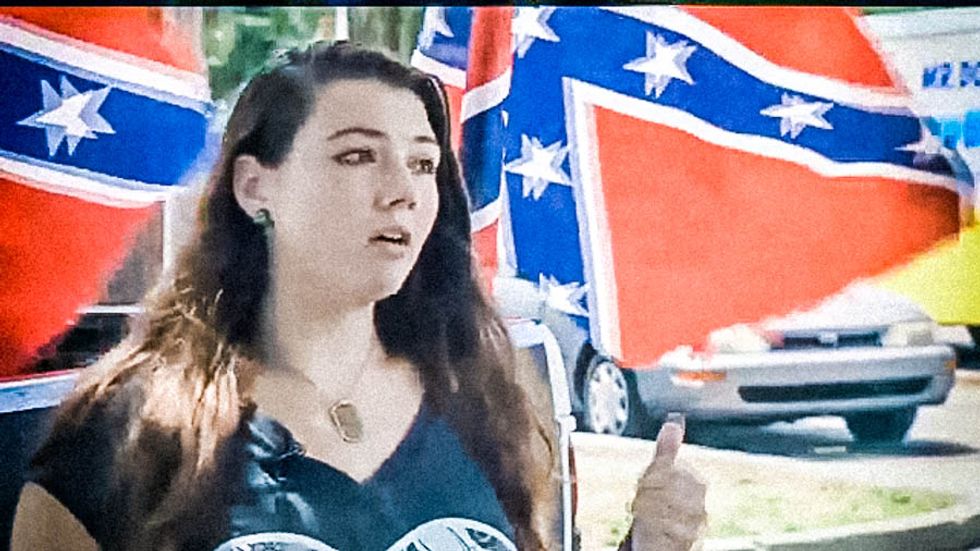 Officials at a Florida high school have apologized to a student who was sent home for flying large Confederate flags, and they said that she was welcome to come back display the Civil War-era symbols on campus.

North Fort Myers High School student Sky Hunter told WFTX that she showed up on the first day of school with two Confederate flags flying from the bed of her truck and was promptly told by a security guard to take them down.

After Hunter insisted that she could not remove the flags because they were bolted to her truck, a vice principal got involved.

"He came out and told me that I had to leave and I asked him why and he said the American flag was fine but I couldn't fly my two Confederate flags," she recalled in an interview with WFTX. "He told me parking my truck there, it was my vehicle, my responsibility to get rid of the flags and I told him it's my vehicle, it's my responsibility, I should be able to fly what I like on them."

Hunter eventually returned home with the truck and had her father take her to school.

"Unfortunately, the wrong people have used this flag for the wrong things," he insisted. "What it means to me and my family is fishing, hunting and being a family."

Hunter's father said that the principal called later that day to apologize, and to say that Hunter and her flags were welcome to come back to school.

WBBH reported that district rules only allowed administrators to ban Confederate flags after they had caused a disruption. However, the vice principal warned Hunter that the flags could become a problem in the future.

A federal courts have repeatedly ruled that schools may restrict the free speech of students, even before it occurs, if there is reasonable evidence that it could cause a disruption.