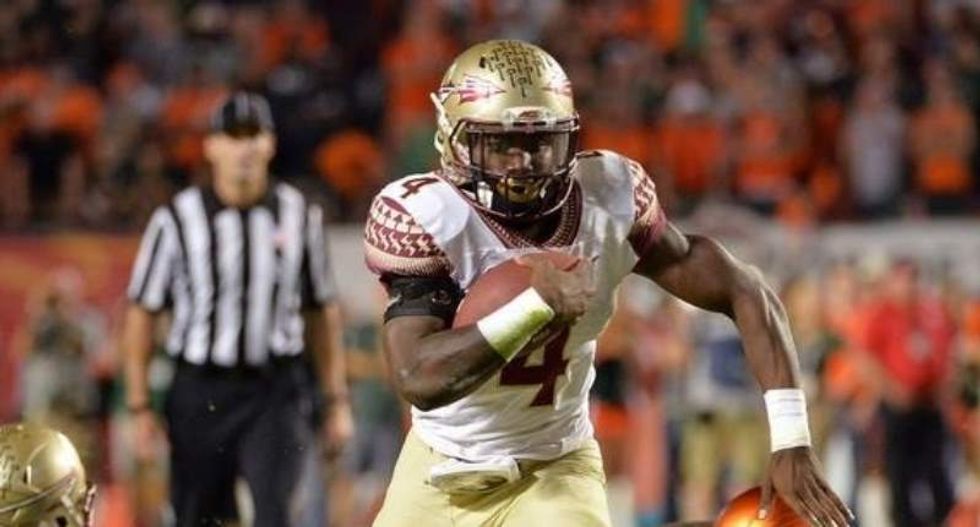 Florida State Seminoles running back Dalvin Cook (4) runs for a touchdown against the Miami Hurricanes on Nov. 15, 2014. Photo by Steve Mitchell-USA TODAY Sports via Reuters.

A star running back for Florida State University's football squad was acquitted on Monday of a misdemeanor battery charge despite testimony from a young woman who told jurors he punched her in the mouth outside a bar in June.

The jury deliberated for 25 minutes before delivering its not guilty verdict in the case against Dalvin Cook, who was FSU's leading rusher last season. Cook was suspended from the team pending the outcome of the trial.

Cook, 19, was charged with battery in connection with an altercation in front of Clyde's and Costello's, a popular bar near the state capitol, shortly after the establishment had closed at about 2 a.m. on June 23.

Joey McCall, Cook’s defense attorney, told the jury the prosecution's case "just doesn’t add up," arguing that it hinged on the memory of the accuser, Madison Geohegan, who admitted she was "buzzed" after drinking with a friend.

Prosecutor Sarah Dugan said a small group of players, including Cook, had approached Geohegan, 21, and Keara Lubeskie, 19, as the two women were leaving the bar and tried to talk with them but were rebuffed.

Lubeskie also identified Cook in court as the player who struck Geohegan. She also testified that she was hit in the side as Cook was flailing at Geohegan, with his friends trying to pull him away.

Cook did not take the witness stand during his day-long trial, but three of his teammates testified that the defendant did not hit Geohegan.

A fourth FSU student who had been passing by the scene and had intervened to try to stop the confrontation testified that he saw Geohegan swing at one of the players with an open hand, but that he did not see anyone punch her.

The following night, former quarterback De’Andre Johnson punched a woman at another bar — an act caught on the club’s video security system — and was kicked off the team.

Following Cook’s arrest in July, coach Jimbo Fisher ordered all of his players to stay out of bars, and the university began added training for athletes regarding their off-field conduct.