'Get off our land!': John McCain chased off reservation by angry Navajo Nation activists 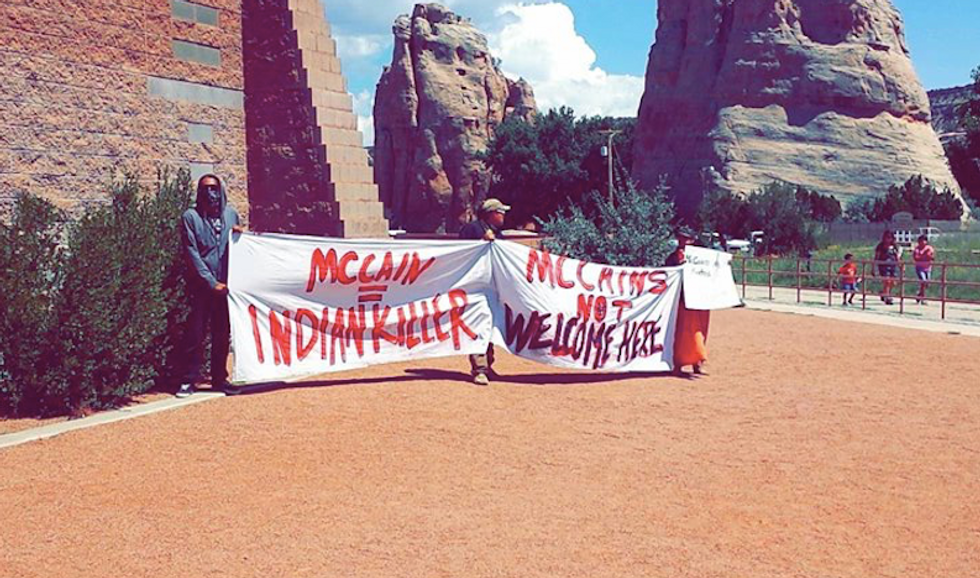 Sen. John McCain (R-AZ) was chased off of Navajo land by a group of activists who are angry over the Gold King Mine spill, which has contaminated river water in the Animas and San Juan Rivers.

According to Native News Online, a delegation including McCain and Arizona Gov. Doug Ducey (R) was visiting the Navajo Nation's capital in Window Rock, Arizona in observance of Navajo Code Talkers Day on Saturday.

Navajo Code Talkers were Navajo Native Americans who worked for U.S. Intelligence during World War II. The Navajo language proved to be too complex for the Axis Powers' intelligence agencies to decipher, making it the perfect code language for encrypted U.S. communications.

McCain and Ducey were in Window Rock for a public meeting with Navajo Nation President Begaye and Vice President Nez about a prospective Navajo Code Talker museum, but instead found themselves talking about the millions of gallons of toxic sludge that have spilled into two life-giving rivers that run through the heart of the Nation's territories.

“I keep saying when are we going to hear from the White House? Not a word. When somebody wins the Super Bowl or an NBA Championship, they get a call, right? And when something like this happens and people are suffering, nothing,” said President Begaye.

The spill was accidentally triggered by EPA workers inspecting the abandoned Gold King Mine. The spill now stretches from Colorado through Utah to New Mexico and Arizona. The slurry is believed to contain mercury, lead and arsenic.

Vice President Nez told McCain that his people have a natural distrust of the government and are currently unconvinced by what they are hearing from the EPA regarding the safety of the water from the two rivers.

“This is just one mine out of hundreds and there’s no Superfund designation,” Vice President Nez said. “Right now, we don’t trust the U.S. EPA’s data and their collection. And one of the things we’re still suffering from are the uranium mines, they need cleanup as well.”

McCain and Ducey declined to address the issue on the record and as the public meeting ended, they were confronted by protesters who chanted "Get off our land" and beat drums in time.

The group of protesters carried a banner that said "McCain = Indian Killer" and "McCain's not welcome here."

"About 60 protesters and or more ran John McCain out of Window Rock today," wrote Lee, saying that the politicians were "met with protesters who made it clear that giving our water rights away will not happen under our watch. The meeting, I am told, did not happen. Delegates, McCain and others went out the side door."

"Bye John McCain! There are a lot of things on the Navajo Nation that our groups large and small are going to tackle," Lee continued. "We cannot trust our Government, so we will make things right, ourselves. POWER TO THE PEOPLE. I missed an Epic day and I didn't get to use my choice words. Next time!!!!!"