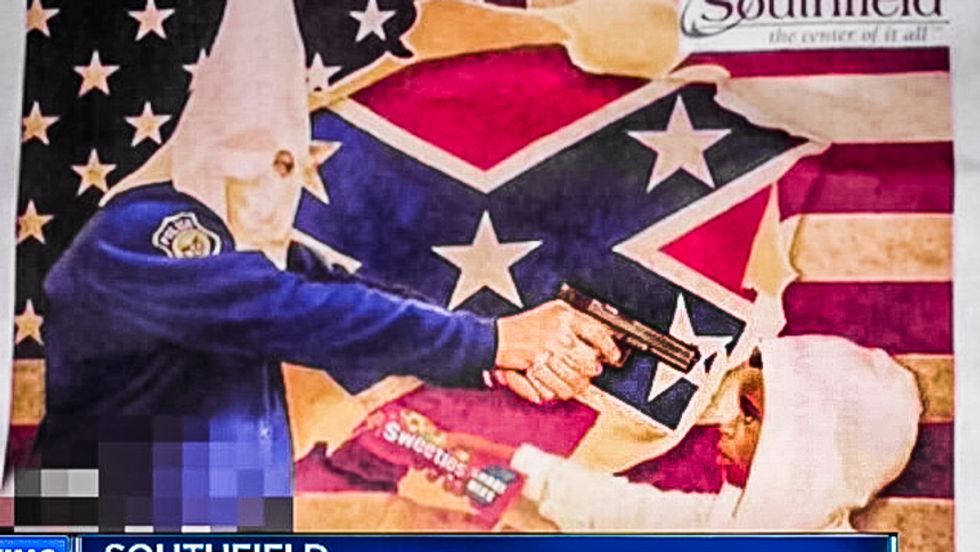 Residents in the Detroit suburb of Southfield say they were outraged after finding racist fliers that call voters to "get the blacks out" by supporting white politicians in November.

Tamiko Denson told WJBK that members of her community began finding the fliers on Friday but it wasn't clear who had distributed them.

In one flier, a police officer is wearing a KKK-style hood and is pointing a gun at the head of a black child, who is wearing a hoodie and holding a bag of candy that is suggestive of slain black teen Trayvon Martin.

"This to me says he needed to be killed and that's someone's child and it's being used in this message," Denson observed.

“To use Trayvon Martin definitely offensive,” Damon Smith told WXYZ. “That was a big issue in the African American community, still is with the Black Lives Matter, things like that going on.”

Another flier features the faces of three white candidates and two white city officials. The flier reads, “Let’s get the blacks out of Southfield in November.”

Mayoral candidate Kenson Siver, whose picture is on the flier, insisted to WJBK that no one supported the message of hate.

“We’re not stupid as African Americans, were not stupid,” Smith explained. “To throw this out, these people are racists don’t vote for them. Number one thing, people who are racists aren’t up in your face racists. There’s only so many. Especially political people. So they are going to go behind the scenes. They’re not going to say I’m a racist, don’t vote for me."

Several residents argued that the person behind the fliers must be from outside of the community.

“There is always a mixture of Jewish, black, white people in this neighborhood,” Smith said. “It is coward of them to use race or try to stir up any kind of hate, you know among different races. You know, it’s just cowardly. I wasn’t raised like that I have all type of nationalities in my family.”