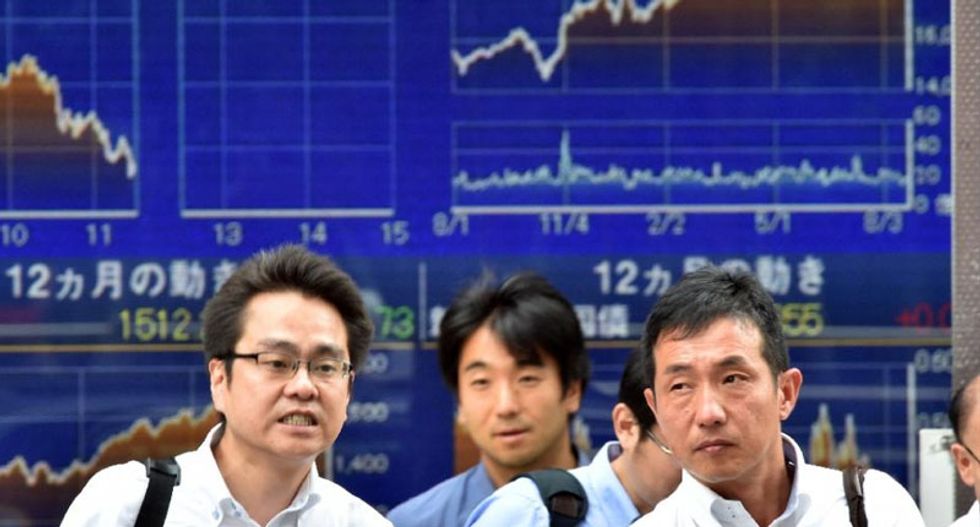 Chinese stocks have tumbled since peaking in mid-June and authorities have launched broad interventions to try to restrain the drops, but Beijing's latest market intervention has failed to restore confidence.

Several European markets sank more than seven percent in afternoon trades, while US stocks slumped at the open with the Dow and the broad-based S&P 500 index sinking more than three percent before recovering somewhat.

"There is no doubt that the panic begets panic in this market," Michael Holland, chairman at Holland & Co., said in a Bloomberg Television interview, calling it "Black Monday" and adding "it's a psychological thing. It's pervasive. It's everywhere."

Falling oil prices also weighed on market sentiment as they slid below $40 a barrel for the first time since 2009, after weak Chinese manufacturing data deepened fears that the Asian giant is growing more slowly than thought.

"The fog of fear over the state of the Chinese economy is only thickening, and with little in the way of non-Chinese news to come this Monday, the markets are going to struggle to escape today without some fairly ugly scars," said Connor Campbell, a Spreadex financial analyst.

"We're following the situation in China very closely. However, the concrete fallout for the German economy is likely to be limited," a government spokesman for Europe's biggest economy told reporters in Berlin.

Some analysts however were cautioning against the panic.

"The current panic is essentially 'made in China'. The recent data from other major economies have generally been good and there is little to justify fears of a major global downturn," said Julian Jessop at research firm Capital Economics.

The euro meanwhile strengthened to $1.1578, after earlier reaching $1.1714, its highest level since mid-January compared with $1.1386 late in New York on Friday.

Russia's ruble also hit a new 2015 low and stocks sank, battered by falling oil prices and the impact of sanctions over Ukraine.

Data on Friday showing Chinese manufacturing activity slowed to a 77-month low had added to the gloom, signalling that even a campaign by Beijing with its vast arsenal of reserves has not been able to stimulate growth.

Chinese authorities have since launched unprecedented measures to support stocks. On Sunday state media said the huge national pension fund would now be allowed to buy equities, in a fresh bid to prop up the market.

Oil prices also tumbled, accelerating losses after breaking below the $40 barrel for the first time in six years Friday on concerns about waning demand in China, the world's top energy importer.

Data showing the number of US drilling rigs rose last week, despite the slump in prices, added to concerns a global supply glut will last for years.

Brent North Sea crude for October, the international benchmark, plummeted $2.18 to $43.28 a barrel in London, its lowest level since March of that year.

"There is no end in sight to the nosedive that oil prices have been experiencing for eight weeks now. As far as today's price slide is concerned at least, fundamental data play only a subordinate role, as concerns about China are chiefly responsible this time," said Commerzbank analysts in a research note to clients.