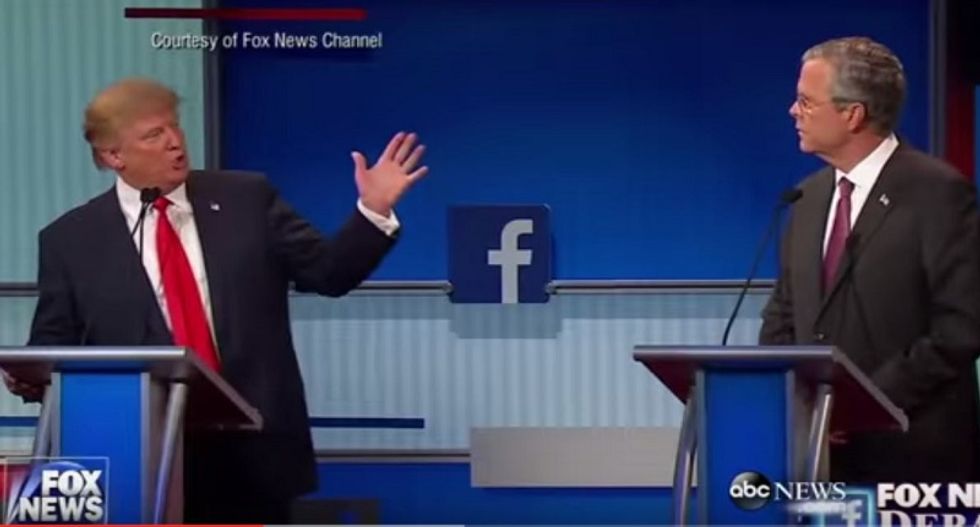 If there's one thing Thursday night's GOP debate revealed, it's that the Republican presidential contenders seem to have forgotten all about Hillary Clinton and the Democrats as they rip on each other in what is turning out to be a knock-down, drag-out fight over the party nomination.

The debate, hosted by Fox News, broke records and drew a whopping 24 million viewers, many of whom seemingly tuned in for pure entertainment purposes.

In the hours after the debate, Trump, who according to his Twitter feed, seemed to have stayed up all night obsessing over it, started attacking popular Fox News host and co-moderator Megyn Kelly, who had dared ask him difficult questions.

Trump, who solicited audience boos when he said he would consider running as a third-party candidate but is currently leading the field, seems to be roundly hated by his competitors. He's drawn even more wrath for a comment he made about Kelly having "blood coming out of her eyes, blood coming out of her wherever."

As a result of Trump's comments, he was disinvited to Saturday's RedState Gathering, according to NBC News. But he's not the only one being bashed.

New Jersey Gov. Chris Christie and Kentucky Senator Rand Paul are feuding, with Christie saying brashly that Paul is unqualified to be president.

Their fight originated from a disagreement over domestic surveillance, which Christie said was needed to keep the country safe and Paul condemned as a violation of constitutional privacy rights.

"Chris Christie is welcome to embrace President Obama's bulk data collection which hasn't caught a single terrorist but has invaded personal privacy," Paul's spokesman responded in a statement to NBC.

Former Hewlett Packard CEO Carly Fiorina waded into the fray, lashing out at Trump for his comments about Kelly.

Former Florida Gov. Jeb Bush, who has been tangling with Trump openly since Trump made racist comments about Mexicans when he announced his campaign run, demanded Trump apologize for the Megyn Kelly comment.

"Come on -- give me a break. I mean, do we want to win? Do we want to insult 53% of all voters? What Donald Trump said is wrong," he said during the RedState Gathering, according to the New York Daily News. "That is not how we win elections — and worse yet, that is not how you bring people together to solve problems. That is not the way to do it."

A tiff between Christie and former Arkansas Gov. Mike Huckabee over the future of Social Security led Huckabee to get heated as well.

He said his idea for a funding structure would be fair "because the money paid at consumption is paid by everybody, including illegals, prostitutes, pimps, drug dealers, all the people that are freeloading off the system now."

Christie took a softer swing at Trump, who he said he liked but didn't believe was qualified to run the country with a background as a business tycoon.

"If you don’t get a bill that you want on your desk, you can’t fire the speaker of the House," Christie said during an interview, according to The Hill. "A CEO’s mentality, while it has some utility, if it has never been used in the governmental structure and understands the give-and-take that government has to have, I think it’s just going to be frustrated and ineffective."

In the end, a tweet by Democratic candidate Sen. Bernie Sanders, I-VT, hinted at why the GOP's internecine wars may be good news for his party in the general election.

"It's over," Sanders wrote Thursday night. "Not one word about economic inequality, climate change, Citizens United or student debt. That's why the Rs are so out of touch."