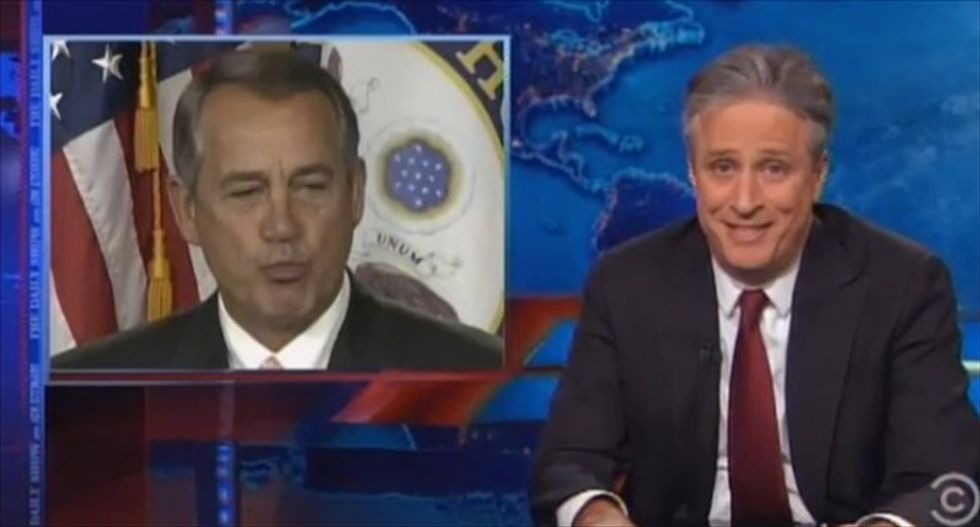 One of the things that makes Jon Stewart so irreplaceable is how much he made himself replaceable. Except for on one issue.

The world is waiting to see how Trevor Noah will do when he replaces Jon Stewart in the news desk chair he occupied for the past 16 years. But the replacement has been a work in progress for Stewart.  From the start,  Stewart showcased correspondents who would go on to create their own shows that shared the same mission: using humor to inform audience about important stories demonstrating hypocrisy, dishonesty, racism, exploitation, bigotry and ignorance of politicians, the media, corporations, and powerful individuals. The Daily Show with Jon Stewart became, and The Daily Show with Trevor Noah will be, just one of a constellation of shows that are guided just as much be a sense of justice and empathy as by a sense of humor.

Stewart has always maintained that his politics are secondary to his comedy, “I’m a comedian first… My comedy is informed by an ideological background… But . . . I’m not an activist. I am a comedian,” he once said. But there are a number of times when he has explicitly dropped his comedic intentions and framing. Most recently, following the Charleston shooting in which a white supremacist killed nine African Americans at the Emanuel African Methodist Episcopal Church Church, Stewart was unable or unwilling to bring the funny to his opening monologue:

Maybe if I wasn't nearing the end of the run or this wasn't such a common occurrence, maybe I could have pulled out of the spiral, but I didn't… So I honestly have nothing other than just sadness once again that we have to peer into the abyss of the depraved violence that we do to each other and the nexus of a just gaping racial wound that will not heal, yet we pretend it doesn't exist… I'm confident, though, that by acknowledging it, by staring into that and seeing it for what it is, we still won't do jack shit. Yeah. That's us.

Stewart acknowledged his departure from the comedy monologues which usually start the show, finishing up by saying, "Sorry about no jokes." He had similarly earnest responses to 9/11 and to the Tucson shooting in 2011, which injured 13 people including Gabby Giffords.

Other instances of Stewart the activist include the entire episode devoted to advocating for the Zadroga bill to provide health care coverage to first responders at the World Trade Center. He shamed Republicans for filibustering the bill and the media for ignoring the story and had on as guests four first responders who became ill because of their work at Ground Zero. News outlets picked up the story and the bill passed.

Jon Stewart empowered other comedians who started out on his show to create their own shows with similarly political aims. He co-created and co-produced The Colbert Report with Stephen Colbert and the Nightly Show with Larry Wilmore on Comedy Central. And he helped launch the career of John Oliver who went on to create Last Week Tonight with John Oliver. All three of these shows have pushed politics into the late night TV lineup. And it's hard to think Colbert won't bring some of this with him when he takes over from David Letterman this fall.

But there is one issue that Jon Stewart, is uniquely positioned to address, fair or unfair, for better or for worse. And that is this Israeli-Palestinian conflict and the double standard which surrounds it. As a Jew, Jon Stewart is allowed to say things about Israel and be called a self-loathing Jew, as opposed to an anti-Semite. This may sound like a small distinction but as I wrote in a piece for Fusion,

One of the most powerful censorship tactics comes from conflating Israel and Jewish identity. Though being anti-Israel or anti-Israel policy is not the same as being anti-Semitic, people like Alan Dershowitz and organizations like the “pro-Israel” lobby American Israel Public Affairs Committee (AIPAC), The Anti-Defamation League (ADL), and the AJC would have you believe otherwise. In other contexts, this sloppy and crude manipulation of reality—that criticism of Israel equals anti-Semitism—would be apparent. Most liberals understand that being critical of the United States’ policies is not the same thing as being anti-American. (Indeed, opposition to invading Iraq, it could be argued, was actually a more patriotic position to take – in addition to the horror, violence, destruction experience by the Iraqis, the war killed and maimed American soldiers, hurt our economy and made us less safe.) Similarly, not only is criticism of Israel not inherently anti-Semitic, but it’s not even inherently anti-Israel.

Perhaps nobody knows this better than Jon Stewart himself, who has seen first hand the way his criticisms of Israel have earned him a self-loathingJew label. In March of this year, Islamophobe extraordinaire Pam Geller called Stewart “vile” and said he deserved the “Most Disgusting Jew on the Planet Award,” and described him as a “vicious traitor, smug and self-righteous, [who] has long been working for the other side under the guise of comedy.” Conservative radio host Mark Levin had this thoughtful critiqueto share in July 2014: “Have you f’ing seen Israel, you little twerp? Have you f’ing seen what surrounds Israel, you little twerp?” He even cast suspicion on the comedian’s decision to change his last name from Leibowitz to Stewart, saying, “I don’t trust Jews who change their names!”

Stewart has spoken out on the logical fallacy equating criticism of Israel with hating Israel, hating Jews, or, if you’re Jewish, hating yourself. In 2014 he told The Hollywood Reporter:

“Look, there’s a lot of reasons why I hate myself — being Jewish isn’t one of them…. So when someone starts throwing that around, or throwing around you’re pro-terrorist, it’s more just disappointing than anything else. I’ve made a living for 16 years criticizing certain policies that I think are not good for America. That doesn’t make me anti-American. And if I do the same with Israel, that doesn’t make me anti-Israel. “

We will have to see if others are able to take on the Israel with the same fearlessness.