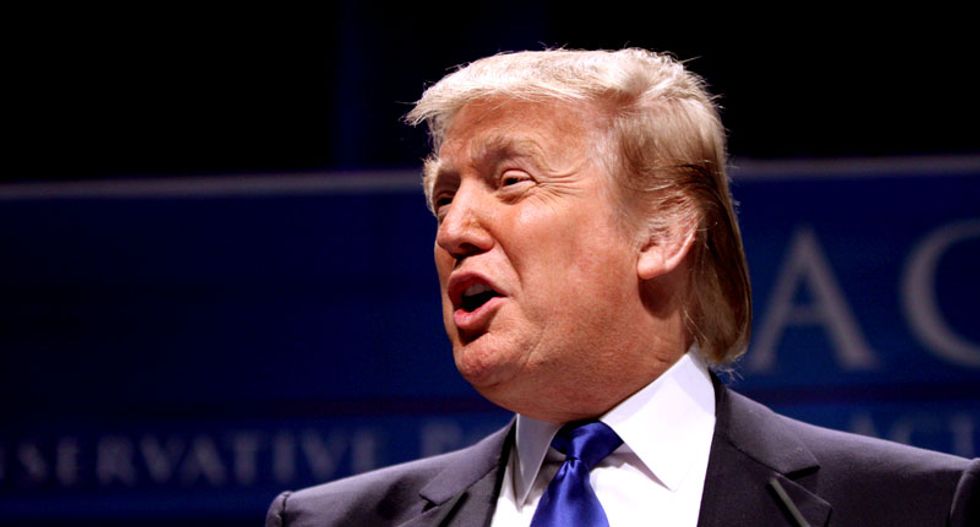 Billionaire Donald Trump has soared in opinion polls for the Republican presidential primary, but inflammatory anti-immigrant rhetoric could cost him the crucial Latino vote in the 2016 White House race.

Since launching his campaign in June, "The Donald" has catapulted to the top of the Republican polls, ahead of 16 other candidates, and at 28 percent this week he is streaking away from his nearest rival by 16 points.

Immigration has dominated the agenda since then, with Trump, 69, promising to build a wall to keep Mexicans -- who he has attacked as drug traffickers and rapists -- from entering the United States illegally.

He has also promised to deport the more than 11 million people living in the United States illegally and to eliminate their US-born children's right to nationality, which the outspoken Trump sees as a magnet for undocumented immigrants.

With his blunt speaking style and refusal to bow to mainstream political correctness, Trump -- whom some Republicans slam as not conservative enough -- actually has won a lot of support from the party's most conservative, who are also the most active in primary voting.

But at the same time, the mega-rich developer has drawn anger and scorn from Hispanics, the fastest-growing US minority group, numbering 54 million, and 10 percent of voters.

"This is personal," said Jorge Ramos, a Mexican immigrant and star news anchor on the top US Spanish language network, Univision.

Trump kicked him out of a news conference in Iowa this week, further enraging Ramos fans.

Trump's meteoric primary surge has set off alarms among Republican leaders who had been planning on delivering a strategy to woo Hispanics.

After their candidate Mitt Romney proposed "self-deportation," he helped hand a win to Barack Obama in 2012.

In 2016, to win the White House, Republicans will have to draw 47 percent of the total Latino vote -- double what Romney won and more than the 44 percent that helped George W. Bush win in 2004, according to pollsters Latino Decisions.

"The Latino vote is essential in getting the next president elected," Zamorano said.

Michael Cornfield, a political scientist at George Washington University, argued that Trump's stands such as they are -- with no other Republican candidate challenging them -- end up making the whole party look bad to Latinos.

"The candidates, donors, and party elites are dazed by the public reactions to Trump. No one expected him to alter the agenda and last this long," Cornfield said.

In fact, instead of trying to get away from what critics say is Trump's bombast, many of his Republican rivals have taken hardline stands themselves over immigration in an apparent effort to get some media attention in a very crowded primary field.

Former senator Rick Santorum, who is polling at one percent, said he would ask Mexico to "stop facilitating the lawlessness on the border and cooperate with our efforts."

He also said he would back the idea of a wall along the US-Mexican border -- a Trump idea also embraced by Scott Walker, the Wisconsin governor polling sixth at six percent.

Louisiana governor Bobby Jindal also urged ending the right to US citizenship by birth, as Trump does.

Jindal is the son of immigrants from India, and Trump himself the son of an immigrant from Scotland.

Jeb Bush, son and brother of former presidents, is married to a Mexican immigrant.

But Jeb Bush incensed immigrants rights groups by criticizing "anchor babies," a negative term that refers to people who come to the United States from abroad to have a child on US soil since the child gets US nationality automatically. Eventually parents gain rights as well.

Five months ahead of the primary vote, and after the original shock at Trump's run and plenty of criticism, many analysts now see him as a viable candidate.

"At this point, anyone who says he can't win the Republican nomination is in deep denial," columnist Eugene Robinson wrote in The Washington Post.

But what Trump might do after that, on the road to the White House, is significantly less clear.

Trump's strategy is a "risky" one because after clashing with Hispanics, it becomes quite difficult to return to the political center, Zamorano said.

Indeed, there has never been a candidate like Trump -- a billionaire developer and reality television star unaccustomed to playing nice with others, or following rules he sees as not applicable to himself.

He lashes out at mainstream candidates for needing money from fundraising, when the reality is, his opponents say, that he would not be where he is politically without simply having had vast enough personal wealth.

"The sudden and sharp rise of an anti-immigrant candidate -- and he is more than that -- is unprecedented in the context of a presidential contest," Cornfield said.

"We do not know yet how consequential it will be for public discourse, the elections, and policy."