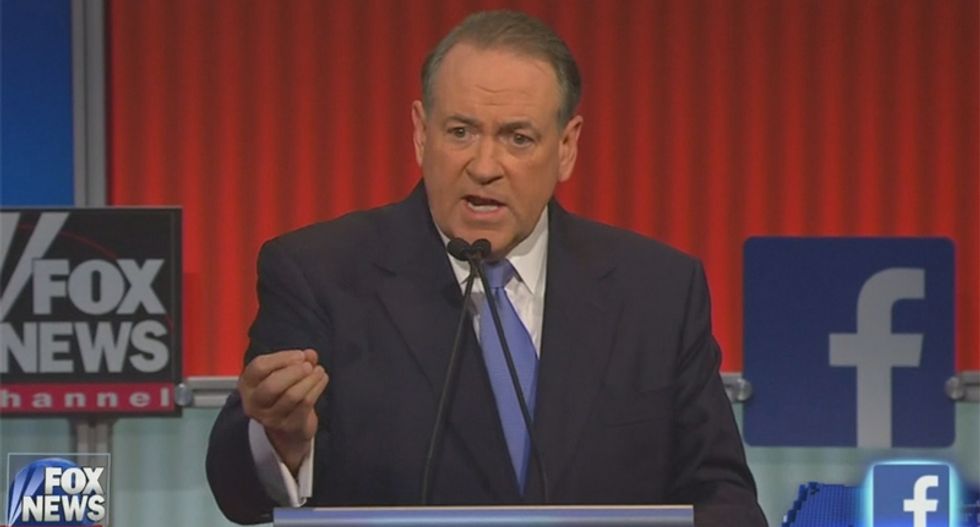 Former Arkansas Gov. Mike Huckabee (R) went off on a weird tangent during the inaugural GOP presidential debate, turning his own earlier attack on Social Security into a defense of the program saying it is "troubled" because it is underfunded due to "freeloaders."

Responding to a give and take with New Jersey Gov. Chris Christie (R) -- after Huckabee had already complained that Americans were "forced" to contribute to Social Security against their will -- Huckabee defended American workers against the takers

"One of the reasons that Social Security is in so much trouble is that the only funding stream comes from people who get a wage," Huckabee explained. "The people who get wages is declining dramatically. Most of the income in this country is made by people at the top who get dividends and capital gains."

Huckabee then attempted to make the case for a Fair Tax which draws income by taxing consumption, while dog-whistling to the Fox crowd about the "freeloaders," a subtle nod to Ronald Reagan's "welfare queens.".

"The Fair Tax transforms the process by which we fund Social Security and Medicare because the money paid at consumption is paid by everybody, including illegals, prostitutes, pimps, drug dealers -- all the people that are freeloading off the system now," Huckabee stated.

Due to time constraints, Huckabee did not explain how freeloaders who do not contribute to Social Security would be eligible for the benefits.