Hundreds march, pray in Ferguson on anniversary of police shooting 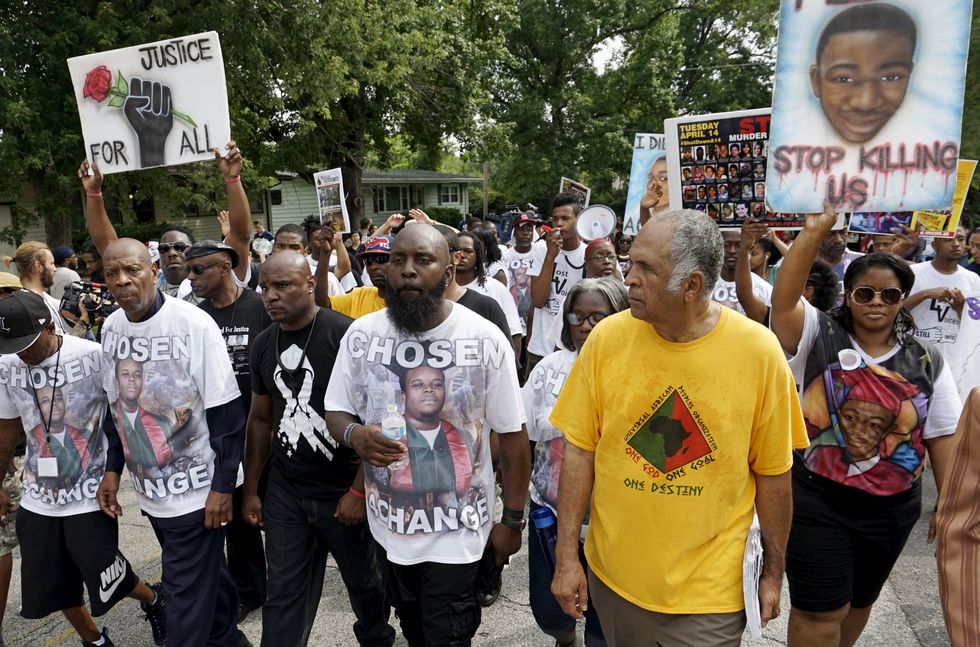 Hundreds of people marched, prayed and held moments of silence in Ferguson, Missouri on Sunday to mark the anniversary of the shooting death of an unarmed black teenager by a white police officer a year ago.

The largely peaceful events on the anniversary weekend were marred when shots rang out while about 1,000 people approached a church, but it was not known if the incident was related to the rally. Police said one person was wounded when several shots were fired, possibly from a moving car, near the route.

White, black, old and young people, some pushing children in strollers, turned out for a day of events in this mostly black St. Louis suburb where Michael Brown, 18, was fatally shot on Aug. 9, 2014.

After 4-1/2 minutes of silence to represent the roughly 4-1/2 hours that Brown's body lay in the middle of the street after he was shot, two white doves were released. The crowd then started a silent march to honor Brown and others who have died at the hands of police.

Brown's shooting sparked months of protests, including incidents of rioting and arson. But it also gave life to a new movement under the "Black Lives Matter" banner that has pushed for better treatment of minorities by police.

Organizers of Sunday's events say their aim is to keep alive a national movement fueled by the police killing of Brown and other unarmed black men in U.S. cities including New York, Cincinnati, Baltimore and North Charleston, South Carolina.

Another name was added to that list on Friday when unarmed 19-year-old Christian Taylor, a black college student, was shot dead by a white police officer in Arlington, Texas.

Arlington police said Taylor was shot as police investigated a burglary at a car dealership in the Dallas-area city.

In New York, about 100 protesters in the borough of Brooklyn lay on the ground on Sunday for 4-1/2 minutes to mark Brown's death. A second rally was expected later in central Manhattan.

In Ferguson, a makeshift memorial of teddy bears, candles and flowers was rebuilt on the quiet residential road where Brown died. A plaque featuring a metallic dove was installed on the sidewalk a few feet from the spot where Brown died, and the street where Brown's blood pooled has been repaved.

Hazel Bland, 51, who lives in the Canfield Green apartment complex where Brown was killed, said she thinks about the shooting every day.

"It is really sad. You never think this would happen, all these police officers killing all these people. I really hate that it happened," Bland said on Sunday.

At the memorial, Brown's father, Michael Brown Sr., wore a T-shirt bearing his son's image and the slogan "Chosen for Change." Others held "Black Lives Matter" banners and signs calling for justice for those killed by police.

"I hurt every day. But I'm trying to make it uncomfortable to people that think this is OK to do this stuff," Brown explained to reporters on Saturday.

A federal review found that the officer, Darren Wilson, broke no laws when he shot Brown. But it also determined that the Ferguson police department for years had violated the rights of the city's black population.

On Saturday night, more than 200 protesters carrying bullhorns, drums and signs demonstrated against police in Ferguson, with some placing the roasted head of a pig on a barricade in front of officers.

But the weekend protests were largely peaceful with police staying behind barricades and allowing demonstrators to vent their feelings.