'I ought to kill you': Ex-Ohio police chief charged with beating wife day before her suicide 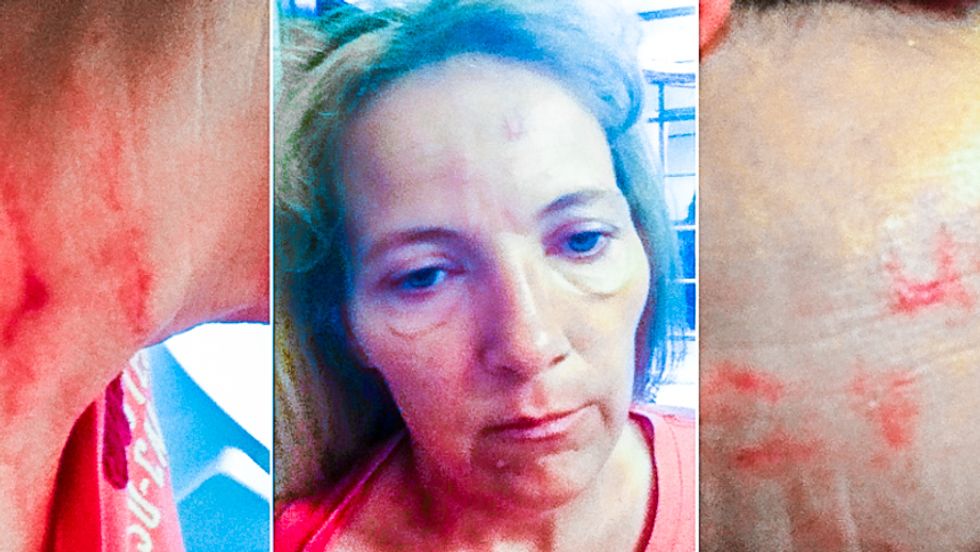 Laura Gast was allegedly abused by her husband, Clark, a day before her suicide (WCPO/screen grab)

A former Ohio police chief was charged this week with battering his wife one day before she reportedly hung herself in 2013.

Clark Gast, the former police chief in Aberdeen, said he discovered his wife, Laura, hanging from a ceiling fan in 2013. Investigators later ruled the death a suicide and said that that Clark Gast was not a suspect.

Family and friends, however, told WCPO at the time that they believed Laura Gast was murdered.

An autopsy report found that the ceiling fan she was hanging from "was not reachable from the chair" and that the noose was tied with multiple knots "she could hardly reach."

The night before Laura Gast died, her 10-year-old daughter had taken photos showing bruises on her mother's forehead, back and neck. WCPO noted that current Police Chief Greg Caudill, who was overseeing the investigation, was a life-long friend of Clark Gast, and that the two were seen out together in the days after Laura Gast's death.

On Tuesday, Brown County Assistant Prosecutor Zac Corbin announced that Charles Gast had been charged with two accounts of domestic violence. WCPO named Laura Gast and her daughter as the victims.

According to a probably cause affidavit, Charles Gast had attacked his wife just one day before he called 911 to say that she had killed herself.

"[I]nvestigators said he grabbed Laura by the throat, slammed her against a wall, lifted her in the air as she gasped for breath and told her 'I ought to kill you,'" WCPO reported.

Laura Gast's daughter also told investigators that Clark Gast beat her mother while she was in bed. And he choked the family dog when it tried to bite him.

"(Laura's daughter) attempted to get the dog from Clark so he wouldn't kill it and at that point Clark grabbed (the child) by the hair of her head and pulled her away," the charging document noted. "(The girl) stated this caused her both pain and fear that Clark would injure her father."

Laura Clark's death was officially ruled a suicide in 2014. It reportedly took over six months for the Aberdeen Police Department to turn over their investigation to the Brown County Sheriff’s Office and the Attorney General’s Office.

"(I’m) very concerned someone's getting away with murder," the Brown County prosecutor wrote after Laura Gast's death was ruled a homicide last year.

Clark Gast faces up to 180 days in jail for each count of domestic violence.