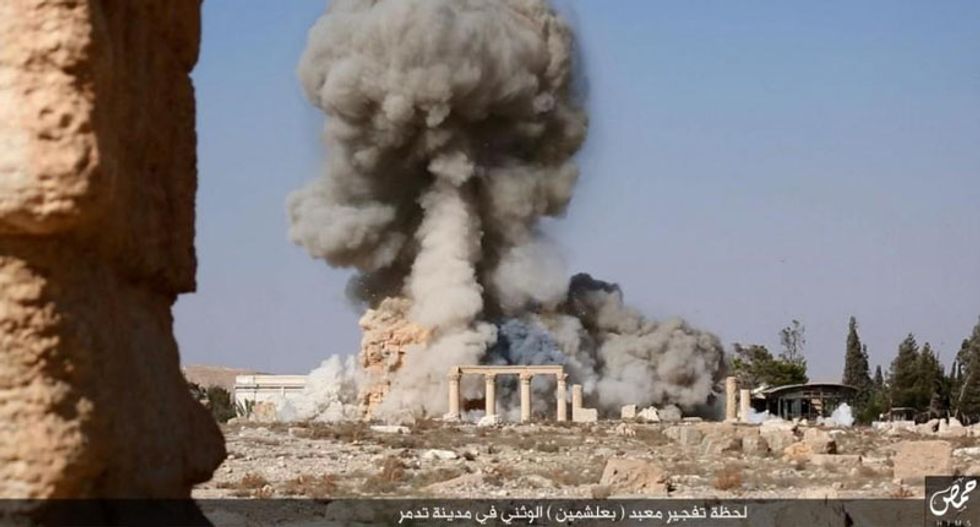 An Islamic State photo purportedly shows the destruction of the Baal Shamin temple in Palmyra, Syria. (http://justpaste.it/b3lshmin via gaagii12_IS/Twitter)

The Islamic State group on Tuesday published images showing the destruction of the Baal Shamin temple in Syria's Palmyra, after international condemnation of the act.

The series of images showed militants placing barrels and small containers, presumably containing explosives, into the temple, as well as similar containers placed on parts of its columns.

The images, which appeared to be screenshots from a video, also showed a large explosion apparently as the temple was blown up, and then a pile of rubble at its former location.

The temple was reportedly destroyed on Sunday and news of its demolition sparked international condemnation.

The head of the UN's cultural watchdog, Irina Bokova, called the act a "new war crime and an immense loss for the Syrian people and for humanity."

Palmyra ancient ruins are a UNESCO World Heritage site and IS's capture of the town on May 21 raised concerns the group would lay waste to it as it has done with heritage sites under its control elsewhere.