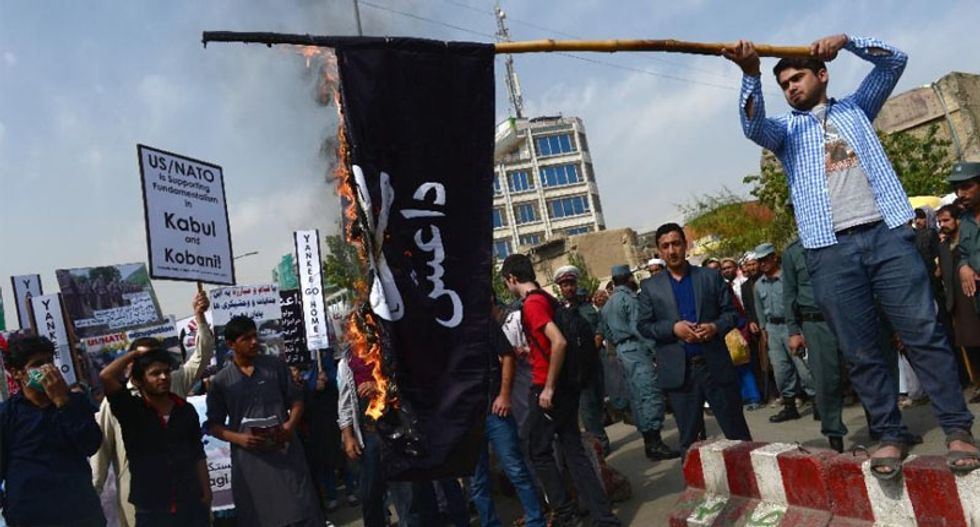 Protesters burn an IS flag during a rally against the Islamic State (IS) group in Iraq and the US Presence in Afghanistan, in Kabul, in October 2014 (AFP Photo/Wakil Kohsar)

The Islamic State group had ambitious plans for Afghanistan, but Taliban resistance, US drone strikes, and a society less scarred by sectarianism mean the extremists have so far failed to repeat their Middle Eastern breakthrough.

The jihadist group, which controls large areas of Syria and Iraq, has been trying for months to establish itself in Afghanistan's eastern badlands, challenging the Taliban on their own turf.

Its franchise in the war-torn country has managed to recruit disaffected Taliban fighters, as the fractious Afghan militant movement wrestles with a bitter power transition.

But the loss of senior commanders in drone strikes and the group's signature brutality, which repels many Afghans, has helped stem its advance.

Frequent clashes and firefights with Taliban insurgents have also hampered its bid to capture significant territory.

"In Iraq and Syria, you might say (IS) are in stage six or seven or eight," top US military officer General Martin Dempsey said last month.

His views are echoed by other NATO officials who say that IS in Afghanistan are not yet capable of carrying out the sort of coordinated operations they are conducting in Iraq and Syria, although the potential exists for them to evolve into a bigger threat.

Some Taliban insurgents, particularly in the restive eastern provinces of Kunar and Nangarhar, have adopted the IS flag to rebrand themselves as a more lethal force as NATO troops depart after 14 years of war.

The risk of defections grew after the July announcement of Mullah Omar’s demise, with many angry Taliban fighters accusing the leadership of covering up the supremo's death for two years.

Some top cadres including Omar's son and brother have refused to pledge allegiance to new leader Mullah Akhtar Mansour, saying the process to select him was rushed and even biased.

"The Taliban have no redeeming features," said Mullah Mirwaïs, a former Taliban militant who is now an IS commander in the Kajaki district in the southern province of Helmand.

Michael Kugelman, Afghanistan expert at the Washington-based Woodrow Wilson International Center for Scholars, said Islamic State is "flavour of the month right now. It has a dramatic appeal to a lot of alienated militants."

But the Taliban are attempting to counter that, with an aggressive drive north from their southern and eastern strongholds, as well as a wave of fatal bombings in the Afghan capital, Kabul.

Experts say the escalating violence demonstrates Mullah Mansour's bid to boost his image within the Taliban, which could halt the defections to IS.

"The Taliban remain a formidable fighting force. It's in a position to fight back and push back against IS inroads," Kugelman said.

"The Taliban has been able to keep IS at bay in eastern Afghanistan."

US drone strikes in recent weeks have also dealt a significant blow to IS in Afghanistan, killing dozens of suspected cadres, including the group's Afghanistan-Pakistan regional chief Hafiz Saeed.

NATO spokesman Colonel Brian Tribus said IS is an "operationally emergent" group but the Taliban pose a "greater threat" to the Afghan government and foreign forces.

Crucially, beyond the battlefield the Taliban have been far more successful than IS in attracting the support of local Afghans.

"Daesh (IS) militants are cruel -- they kill without reason," explained a resident of the volatile district of Achin in eastern Nangarhar province bordering Pakistan.

The Taliban, who have themselves often been accused of savagery during their 14-year insurgency, are seeking to appear as a bulwark against IS's rein of brutality and as a legitimate group waging an Islamic war.

Earlier this month the Taliban condemned a "horrific" video that apparently showed IS fighters blowing up bound and blindfolded Afghan prisoners with explosives.

"This un-Islamic act... can never be justified," the Taliban said.

One other reason IS have struggled to gain a firmer foothold in Afghanistan, Kugelman said, is because of the lack of a deeply sectarian environment.

"It's sharp sectarian divides that IS is exploiting in Iraq and Syria," he said. "IS simply cannot use any sort of sectarian divide as traction to gain a foothold in the region. You simply don't have a sharp divide in Afghanistan."