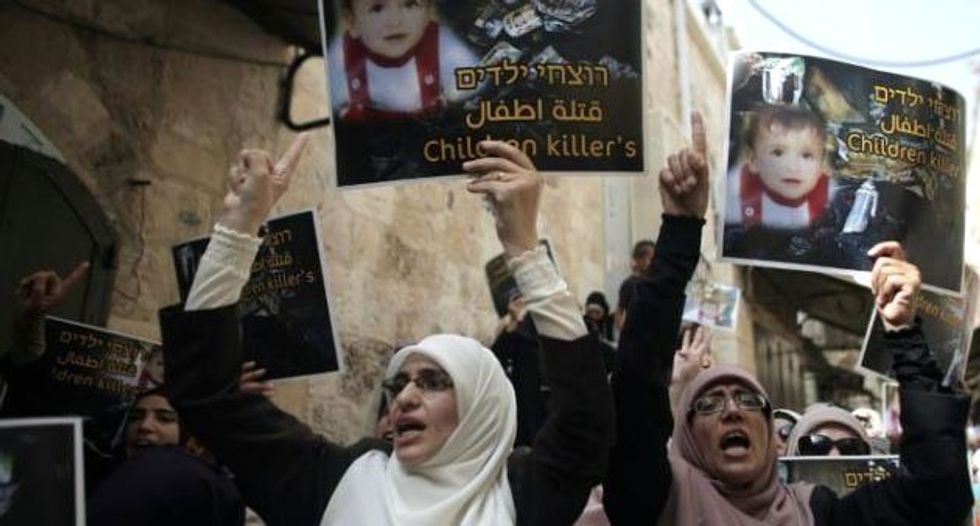 AFP/AFP/File - Palestinians take part in a protest against the death of the 18-month-old child killed in an arson attack in the occupied West Bank, on August 2, 2015

Israel arrested two suspected Jewish extremists on Tuesday after extending the detention of the leader of a radical religious group following the burning to death of a Palestinian baby.

One suspect was placed in "administrative detention", a form of incarceration without trial normally reserved for Palestinian prisoners and the first time the measure has been taken against an alleged Jewish extremist.

Authorities on Monday detained Meir Ettinger, whose grandfather Meir Kahane founded the racist anti-Arab Kach group, and a court prolonged his detention until the weekend on suspicion of "nationalist crimes".

"A second individual, Eviatar Slonim, was arrested for belonging to an extremist organisation," a spokeswoman for the Shin Bet domestic security agency told AFP on Tuesday.

No details were provided on any charges against him.

The subject of the order is Mordechai Mayer, an Israeli settler arrested for "his involvement in violent activities and terrorist attacks in recent times", a defence ministry statement said.

Media reports earlier suggested that the attorney general had given permission for the authorities to take such action against three suspected extremists.

Israel normally applies administrative detention, which dates from British-mandated Palestine, against Palestinians, allowing them to be held without trial for renewable six-month periods.

But it can now be used for Jewish detainees in cases where there is insufficient evidence to go to trial or if the suspect refuses to testify.

Ettinger was arrested "because of his activities in a Jewish extremist organisation", a Shin Bet spokesman said.

According to Israeli media, he was the brains behind a June 18 arson attack on a shrine in northern Israel where Christians believe Jesus performed the miracle of the loaves and fishes.

Police said Ettinger, who is 23, was suspected of "nationalist crimes", but did not accuse him of direct involvement in last week's firebombing of a Palestinian home in the occupied West Bank, in which a toddler was burned to death.

"All that is window dressing, there is nothing on file" connecting Ettinger to the crime, his lawyer Yuval Zemer told reporters after Tuesday's hearing, which featured a smiling Ettinger flanked by two courtroom guards.

The hearing was held in camera.

Citing a blackout ordered by the authorities, Zemer also said nothing about the exact reasons for his client's arrest on Monday.

There was no suggestion that either Slonim or Mayer were suspects in Friday's attack, which killed 18-month-old Ali Saad Dawabsha, sparking an international outcry over Israel's failure to get to grips with violence by hardline Jewish settlers.

Dawabsha's parents and brother were badly burned in the attack on their home and remain in a "critical" condition, a hospital spokeswoman said.

Graffiti at the site of the attack indicated it was carried out by Jewish extremists.

A Jewish Star of David was spray-painted on a wall along with the words "revenge" and "long live the Messiah".

That was indicative of so-called "price tag" violence -- a euphemism for nationalist-motivated hate crimes by Jewish extremists.

Prime Minister Benjamin Netanyahu condemned the attack on the Dawabsha family as "terrorism in every respect", and vowed to spare no effort in bringing the perpetrators to justice.

"Our policy is one of zero tolerance against terrorism, wherever it comes from," he said on Tuesday while visiting an Israeli woman in hospital after a petrol bomb attack on her car late Monday.

"There is no law above the laws of the state," the premier said.

Also Tuesday, hundreds of Israeli Arabs marched in Shfaram in northern Israel to remember a 2005 attack in which an Israeli deserter and Kach member shot dead four people on a bus before being lynched.