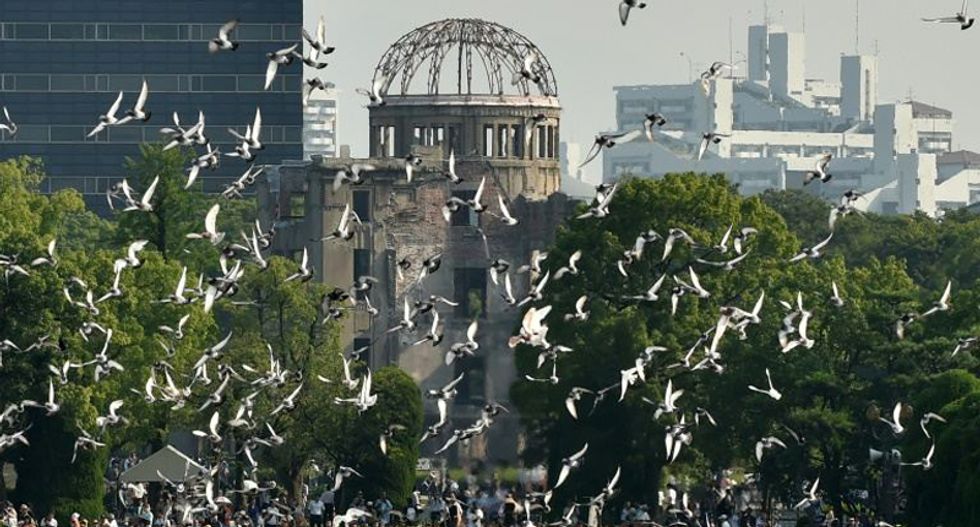 Doves fly over the Hiroshima Peace Memorial Park in Hiroshima, western Japan on August 6, 2015 during a memorial ceremony to mark the 70th anniversary of the atomic bombing (AFP)

Tens of thousands gathered in Hiroshima Thursday to mark 70 years since the dropping of the first atomic bomb, with opinion still divided over whether its deadly destruction was justified.

Bells tolled as a solemn crowd observed a moment of silence at 8:15 am local time (2315 GMT), when the detonation turned the bustling city into an inferno, killing thousands instantly and leaving others with horrific injuries to die a slow death.

Children, elderly survivors and delegates representing 100 countries were in the crowd with many placing flowers in front of the cenotaph at Peace Memorial Park, as doves were released into the air.

American B-29 bomber Enola Gay dropped a bomb, dubbed "Little Boy", on Hiroshima on August 6, 1945, in one of the closing chapters of World War II.

Nearly everything around it was incinerated by a wall of heat up to 4,000 degrees Celsius -- hot enough to melt steel.

"As the only country ever attacked by an atomic bomb... we have a mission to create a world without nuclear arms," Prime Minister Shinzo Abe told the crowd.

"We have been tasked with conveying the inhumanity of nuclear weapons, across generations and borders."

Japan plans to submit a fresh resolution to abolish nuclear weapons at the UN general assembly later this year, he said.

US Secretary of State John Kerry, at a regional diplomatic meeting in Malaysia, described the bombing as a "very, very powerful reminder" of the impact of war.

US ambassador Caroline Kennedy and under-secretary for arms control Rose Gottemoeller, the most senior Washington official ever sent to the service, attended Thursday's ceremony.

This year's memorial comes days ahead of the scheduled restart of a nuclear reactor in southern Japan -- the first one to go back on line after a two-year hiatus following the tsunami-sparked disaster at Fukushima in 2011.

While Abe has pushed to switch reactors back on, public opposition remains high after the worst nuclear accident since Chernobyl in 1986.

Japan's nationalist leader has also been criticised for efforts to expand the role of his pacifist country's Self-Defence Forces, changes that open the door to putting troops into combat for the first time since the war.

In a fresh controversy over the unpopular moves, defence minister Gen Nakatani admitted that the new security laws being debated in parliament could -- in theory -- allow for Japan to transport nuclear weapons to allies, but he quickly dismissed it as unlikely.

"You must never make Japan a country that repeats the same mistakes (of the past)," Yukio Yoshioka, an 86-year-old, told Abe during a brief meeting on Thursday, local media said.

About 140,000 people are estimated to have been killed in the Hiroshima attack, including those who survived the bombing itself but died in the following days, weeks and months from radiation sickness.

Gums bled, teeth fell out, hair came off in clumps; there were cancers, premature births, malformed babies and sudden deaths.

On Thursday, the International Committee of the Red Cross said hospitals are still treating thousands of bomb survivors for long-term health effects.

"I don't know why I survived and lived this long. The more I think about it... the more painful it becomes to recall," Hiroshima survivor Sunao Tsuboi, 90, told AFP before the anniversary.

But its militarist past evokes strong emotions, particularly in China and Korea, which suffered from Japan's brutal march across Asia.

"Ceremonies like this water down the fact that Japan was also a perpetrator of war crimes," said a scathing editorial in China's Global Times newspaper, which is close to the ruling Communist party.

"This shows how adept Japan is at scheming and calculating."