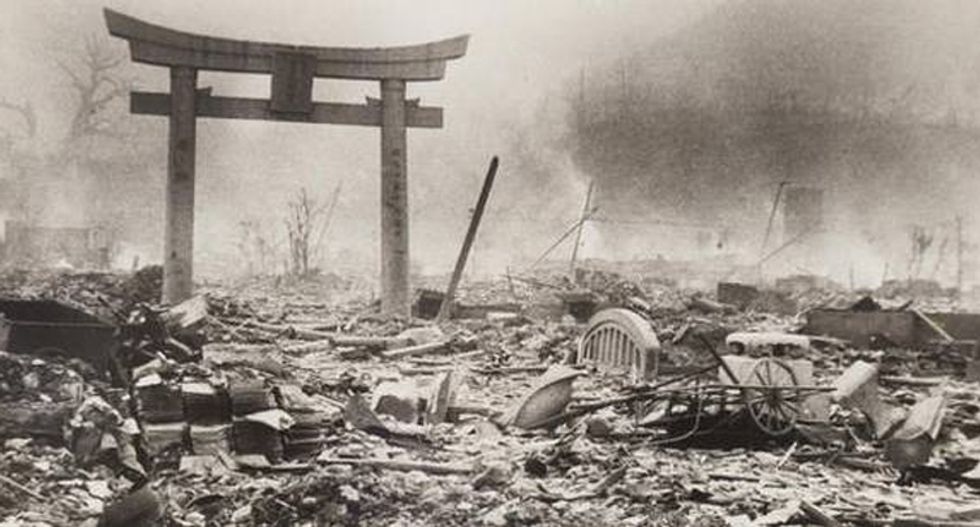 Japan on Sunday marked the 70th anniversary of the atomic bombing of Nagasaki that claimed more than 74,000 lives, as Prime Minister Shinzo Abe came under fire for his attempts to expand the military's role.

Bells tolled and tens of thousands of people, including ageing survivors and the relatives of victims, observed a minute's silence at 11:02 am (0202 GMT), the moment the bomb from a US plane devastated the port city on August 9, 1945.

Abe laid a wreath at the ceremony, attended by representatives from 75 countries including US ambassador Caroline Kennedy.

"As the only country attacked with an atomic bomb in war, I am renewing our determination to lead the global effort for nuclear disarmament, to create a world without such weapons," Abe said in his speech.

He promised that Japan would continue to abide by its long-held principles: not producing, possessing or allowing nuclear weapons on Japanese territory.

Abe was criticised for failing to mention the three principles at a ceremony days earlier in Hiroshima, alarming atomic bomb survivors -- particularly when the nationalist leader is trying to push through legislation to extend the military's role.

Nagasaki survivor Sumiteru Taniguchi, 86, lashed out at Abe's government for trying to revise the pacifist constitution, accusing it of returning Japan to the state before the end of World War II.

"The security bills which the government is trying to push through would jeopardise our long-time movement for nuclear abolition and hopes of hibakusha (atom-bomb survivors)," he said in a thin voice. "I cannot tolerate the bills."

"Worries and anxieties are now spreading among us that this pledge made 70 years ago and the principle for peace in the Japanese constitution may be now undermined," he said to loud applause.

Abe has faced criticism and opposition for his attempts to expand the role of his pacifist country's so-called Self-Defence Forces.

These would allow them to engage in combat -- in defence of an ally which comes under attack -- for the first time since the war.

A constitution imposed by a post-war US occupation force prevented the military from engaging in combat except in the nation's self-defence.

In the now bustling port city of Nagasaki, about 74,000 people died in the initial blast near a major arms factory from a plutonium bomb nicknamed "Fat Man". Thousands of others perished months or years later from radiation sickness.

The attack on Nagasaki came three days after the US B-29 bomber Enola Gay dropped a bomb, dubbed "Little Boy", on Hiroshima in history's first atomic bombing.

About 140,000 people are estimated to have been killed in the Hiroshima attack, including those who survived the bombing but later died from radiation sickness.

Gums bled, teeth fell out, hair came out in clumps; there were cancers, premature births, malformed babies and sudden deaths.

The twin bombings dealt the final blows to imperial Japan, which surrendered on August 15, 1945 to bring an end to World War II.

While some historians say they prevented many more casualties in a planned land invasion, critics counter that the attacks were not necessary to end the war, arguing that Japan was already heading for imminent defeat.

At memorial ceremonies in Hiroshima on Thursday, Abe said Japan would submit a fresh resolution calling for the abolition of nuclear weapons at the UN General Assembly this year.

"We have been tasked with conveying the inhumanity of nuclear weapons, across generations and borders," he told the crowd.

Pope Francis said Sunday the Hiroshima and Nagasaki bombings still evoked "horror and revulsion" 70 years on and called for a ban on nuclear arms and weapons of mass destruction.

In his traditional Angelus prayer at Saint Peter's Square, the pontiff said Hiroshima had come to represent "the symbol of man's disproportionate power to destroy through the erroneous use of scientific progress and techniques".

This year's memorials come days ahead of the scheduled restart of a civilian nuclear reactor in southern Japan -- the first to go back on line for two years because of concerns following the disaster at the Fukushima atomic plant in 2011.

While Abe has pushed to switch the reactors back on, public opposition remains high after the worst nuclear accident since Chernobyl in 1986.