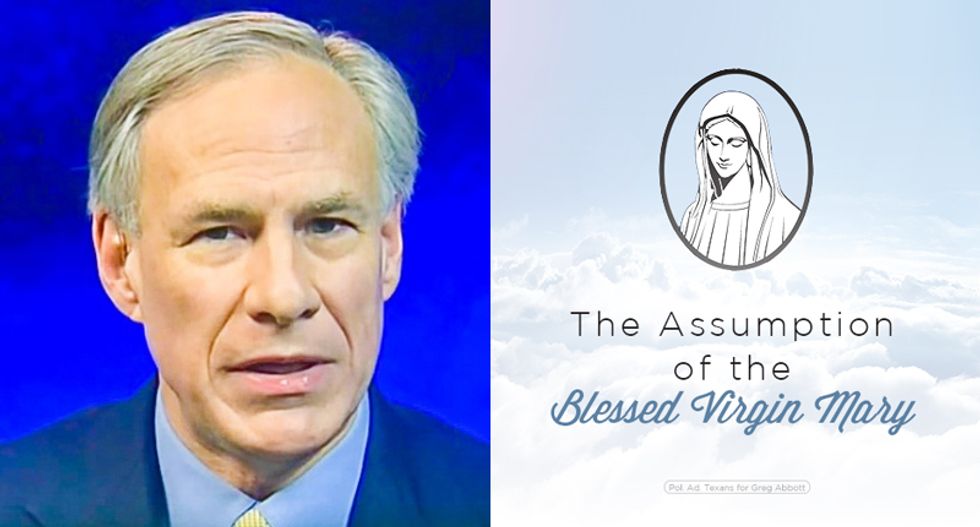 Texas Governor Greg Abbott (R) got a lesson in religious tolerance over the weekend after posting an image of the Virgin Mary accompanied by praise on his Facebook page, according to the San Antonio Express-News.

On Saturday the governor, who is Catholic, posted an image of the mother of Jesus on his Texans for Abbott Facebook page, accompanied by the comment: "The Virgin Mary is exalted above the choirs of angels. Blessed is the Lord who has raised her up." Saturday was  the celebration of  the Assumption; the day when the Holy Mother is believed to have been accepted into Heaven.

Responses from followers on Facebook were fast and furious, with many joining in with the governor and praising the Virgin Mary, while others less accepting of his Catholicism accused him of idolatry.

“So you’re Catholic Mr. Abbott? So what? You worship idols; not something I’d be telling everyone,” one commenter wrote, while another seconded the comment, writing: “This is nothing more than idol worship.”

Another pointed out that “Jesus is The Blessed and Holy One!!!" before asking "Were you hacked ?????"

Comments ran to over 900 as people of various faiths battled over whose religion was the most righteous, argued over Scripture, and even questioned the accuracy of the Bible and whether Jesus wrote it.

While the governor is known for posting religious messages on Facebook frequently, mentioning in a round-about-way his Catholicism proved too much to fundamentalists who regard Catholics with suspicion and hatred, believing they have betrayed the Bible which called for only one true faith (Ephesians 4:4-5).

As one commenter, Douglas Page wrote on the Facebook post: "I hate to tell you this, but some of us have studied history enough to know that the Catholic Church is not a Christian church. For over 1000 years the Catholic was dedicated to imprisoning, torturing, and burning Christians. and for just as long conquered and converted by the sword. To many of us, to call the Catholic church Christian is to bloody the name of Christ."

According to David Crockett, chairman of the political science department at Trinity University in San Antonio, many of Abbott's constituents may not have been aware of his religious affiliation when he ran for governor.

“The idea that you could find a Southern Baptist Republican who would look at this and say, ‘I should challenge Abbott for the nomination’ — I just can’t imagine that,” Crockett said. “When you move away from politics and look at theology, there are certainly a not insignificant number of evangelical Protestants who look upon Catholicism with a little bit of suspicion.”