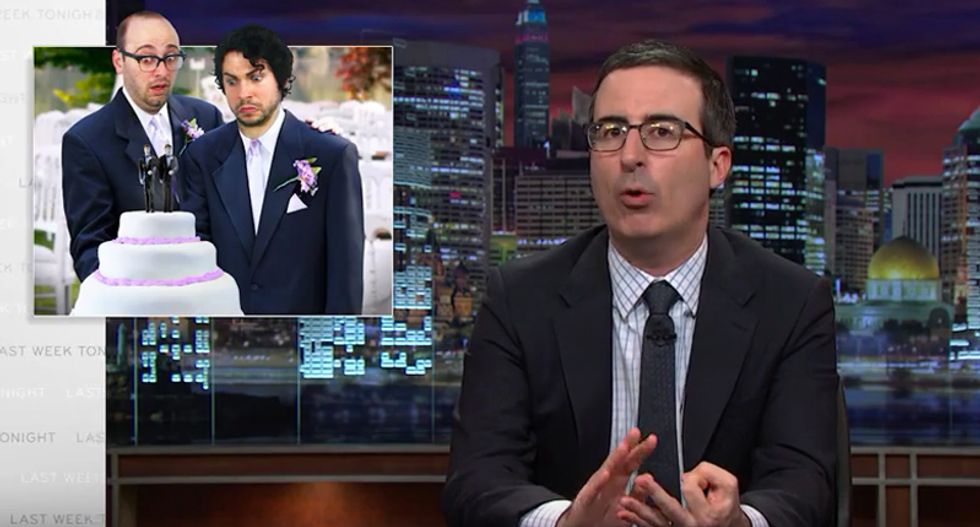 On HBO's Last Week Tonight, host John Oliver urged the federal government to codify LGBT rights on a federal level, pointing out the patchwork of protections given to LGBT people depended upon which state they live in.

Oliver began by noting that at the recent GOP debate, Ohio Governor John Kasich received applause for saying he attended a same-sex wedding.

"Wow. A gay wedding just got applause at a Republican debate," Oliver said. "Add that to the list of things that would have been unthinkable in 2004. Like the phrase 'Academy Award winner Mathew McConaughey.' People would have said you were insane."

On the other side of the coin, the host shared a clip of presidential candidate Scott Walker, as the governor of Wisconsin gave what Oliver termed a "squirrely" answer as to whether he would attend a gay wedding that was an untranslatable Palinesque word salad without any definite answer.

Pointing out that not all states offer LGBT non-discrimination laws -- which allowed a gay couple to be kicked out of a restaurant in Texas and a pediatrician to say he wouldn't provide health care services to the child of a lesbian couple -- Oliver then turned to Colorado baker Jack Phillips who refused to make a wedding cake for a gay couple leading to a court case which he lost.

Phillips, who claims he has made over 5,000 wedding cakes, said it is against his religious principles to make a cake for a same sex wedding, adding, "I actually feel like I'm taking part in the wedding. Part of me goes to the reception."

Oliver then unloaded on Phillips.

"That baker denied service to a gay couple in 2012, citing his belief that providing them with a wedding cake would offend his definition of traditional marriage," Oliver continued. "But that's a little hard to square with the fact that he allegedly had no problem providing a cake for a wedding between two dogs. And look, those two dogs may lick their own balls, but I'm sure even now they are regretting ordering a vanilla-cum cake from the ejaculating baker of Colorado."

Oliver turned to the Equality Act guaranteeing LGBT rights in all states, still pending in Congress without any GOP sponsors, saying it would "fix all of this right now."

"The answer to 'Should gay people be discriminated against?' is just 'no,'" he stated. "It is long past time that gay people have the same rights as straight people have. Namely, to be fired because they're being replaced by a computer. To be denied service at a restaurant because they're neither wealthy looking nor attractive. And more specifically, to have a wedding cake but not eat it because they suspect a strange man for some reason may have ejaculated into it."