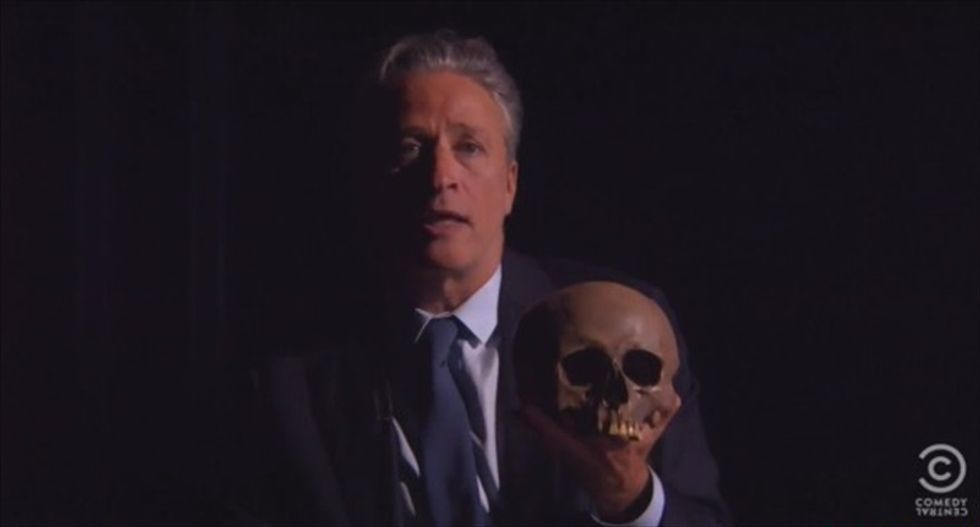 Jon Stewart turned his powers of "evisceration" on the coverage of his Daily Show run on Wednesday, sending up the often-aggressive language used to describe his attacks on conservatives, racism and terrorism.

"I feel like what we've built here is a monument to evisceration," he said, adding, "If you're still walking around with a belly full of viscera, know this: we didn't forget you. We'll put it all up on the web."

After showing a plethora of headlines praising him for "eviscerating," "pummeling" or "crushing" the show's targets, Stewart attempted to take a victory lap, replaying footage of his commentary criticizing, among other things, lax prosecution against the banking industry.

"Man, I didn't just eviscerate Wall Street," he gloated. "I burned that b*tch to the ground, bulldozed the ashes, paved over them, and built an Arby's on top."

He then stopped to lob one more mock slogan for the fast food chain: "Arby's: a lot more than your 401k is going down the toilet."

Unfortunately for Stewart, he realized that besides Wall Street, other frequent targets like Fox News, the Islamic State terrorist group, and police violence had not been beaten down by his commentary. It was enough to drive him to Shakespearean levels of self-doubt.

"Hath my efforts all been for naught?" he wondered. "As I shuffle off this basic cable coil, must I discover my years of evisceration have embettered nothing? Sixteen years of barbs and jeers spurred none to greatness."

Watch Stewart's commentary, as posted online by Crooks and Liars, below.