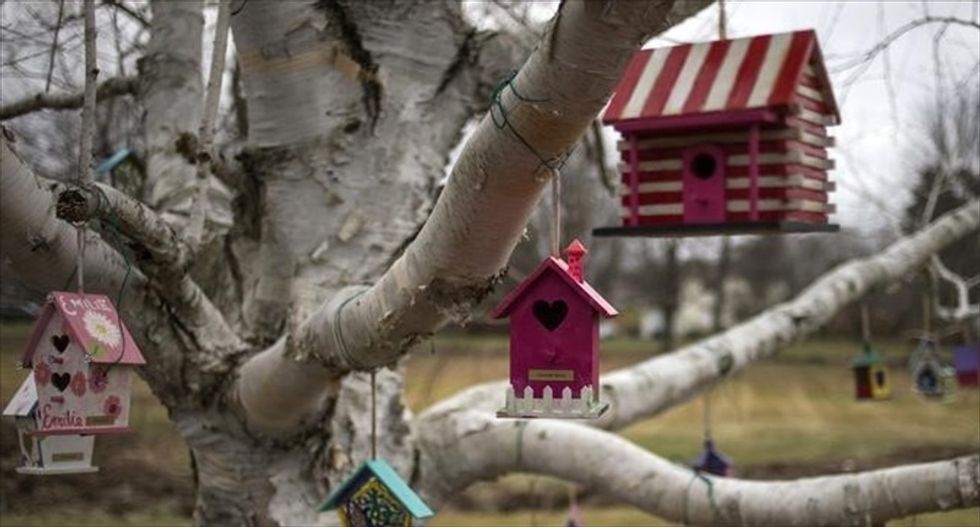 Mementos for 20 students and six educators, killed in the massacre at Sandy Hook Elementary School, hang from a tree in Newtown, Connecticut on Dec. 14, 2014. Photo by Adrees Latif for Reuters.

A Connecticut judge on Thursday approved the largest portion yet of a settlement in which the estate of the mother of the gunman who carried out a 2012 massacre at Sandy Hook Elementary school will pay out $1.5 million to families of 16 victims.

Probate Court Judge Joseph Egan in Bethel, Connecticut approved deals with the families of six of the 20 first-graders killed in the Dec. 14, 2012, rampage, according to a court clerk and attorneys who were present at the closed hearing.

Two survivors of the attack, which also killed six educators, joined the initial lawsuit but were not part of the final settlement, which represents the amount of a homeowners' insurance policy that gunman 20-year-old Adam Lanza's mother had held on her Newton, Connecticut home.

One deal had been approved earlier and nine more are pending approval at other probate courts around the state, according to attorney Rosemarie Paine, the president of the Connecticut Trial Lawyers Association, which arranged legal representation for the families, each of which will receive $93,750 under the settlement.

"While there can never be adequate compensation to offer these families for their losses, we are pleased the probate court granted our applications to settle these claims," Paine said.

Lanza began his rampage, one of the deadliest school shootings in U.S. history, by fatally shooting his mother, Nancy, in their home before driving to the school where he opened fire on students and educators and finally shot himself dead as he heard police sirens approaching.

The legal claims were made in two separate lawsuits filed against Nancy Lanza's estate. Her home has since been torn down.

Lanza used a Bushmaster AR-15 rifle that his mother had legally purchased and kept in a gun safe next to her son's bedroom. Despite a history of mental health problems, Adam Lanza had "unlimited access" to the weapon, according to police.

"Many of the families who suffered losses at Sandy Hook Elementary School were faced with being unable to bring Adam Lanza to justice or otherwise hold him or his mother accountable for what her son was able to do because of her actions," said Randy Savicky, a spokesman for Silver Golub & Teitell LLP, a law firm representing some of the families.

Attorney Samuel Starks, the Lanza estate's administrator, could not be reached for comment Thursday.