Katrina’s ‘Heckuva Job, Brownie’ absolves self from disaster — and you won’t believe who he blames 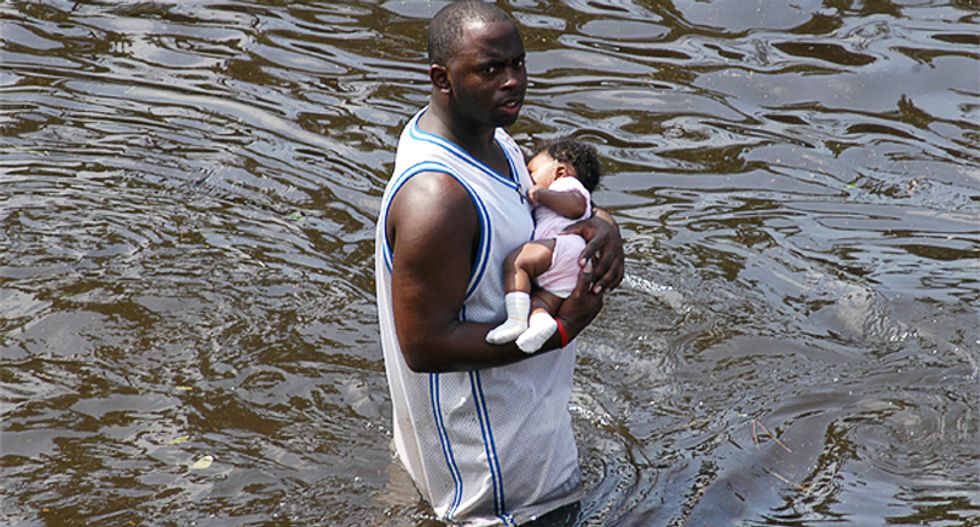 Ten years after Hurricane Katrina devastated New Orleans, Michael Brown -- former FEMA head during President George W. Bush's administration -- is defending his actions during the disaster, saying the most he can be blamed for is "mishandling" press relations.

Brown, who was widely mocked for his ineffectiveness in dealing with the disaster after the president complimented him with "Heckuva job, Brownie," claims he shouldered the blame at the time, but that it was unwarranted and that it was the "worst part" about Katrina for him.

Writing in Politico, Brown pointed fingers in all directions -- except for back at himself -- as he explained, "There were many dark moments in those three weeks on the Gulf Coast, and FEMA and the federal government certainly made some mistakes, but perhaps the worst part was being held responsible for the things that I didn’t control at all."

Brown, who resigned in the wake of the Katrina disaster after being replaced at the scene by Coast Guard Vice Admiral Thad W. Allen, now hosts a radio show in Denver. He believes he was unfairly saddled with the blame after the agency he headed failed to evacuate residents ahead of the storm and afterward was incapable of taking care of them.

According to Brown, he was a mere cog in a machine that was at the mercy of President Bush, former New Orleans Mayor Ray Nagin, former Louisiana Governor Kathleen Blanco, and Homeland Security head Michael Chertoff in what he called a "power struggle."

"Had the mayor and governor fulfilled their responsibilities as elected leaders of their city and state, most if not all of the people crying for help in front of national television cameras would not have been there. They would have been in other locales, safe and secure," he wrote in Politico. "But the blame was not placed on those responsible. The blame was placed on me—the one person who had no authority to do anything at that point except get out the checkbook and start paying the Department of Defense to evacuate people from that hellhole to a place of safety. And that is exactly what I did."

One thing Brown could do was assist with media coverage of the disaster, but chose to not allow CNN host Anderson Cooper and a cameraman two spots in a rescue boat. Cooper ended up getting his own boat, which Brown claims led to misleading coverage.

"Cooper and his cameraman rented a boat, and with total disregard or ignorance of the systematic, grid-driven rescue of victims, managed to find a house with victims yet to be rescued. As Cooper and his cameraman reported on 'their' rescue, the inevitable question of where the rescuers are was asked, and the next stage of blame began," Brown wrote. "Based on that one, isolated, out-of-context rescue, the narrative was set that the rescue efforts were disjointed, in disarray and uncoordinated."

While Brown may blame media coverage for making him the scapegoat, a review of his emails in the aftermath of the disaster showed a lack of concern about the unfolding events. Government emails showed Brown complaining about finding a dog-sitter and discussing his fashion choices for when he was appearing on camera as thousands waited for help in the squalor of the Superdome as bodies floated in the Louisiana floodwaters.