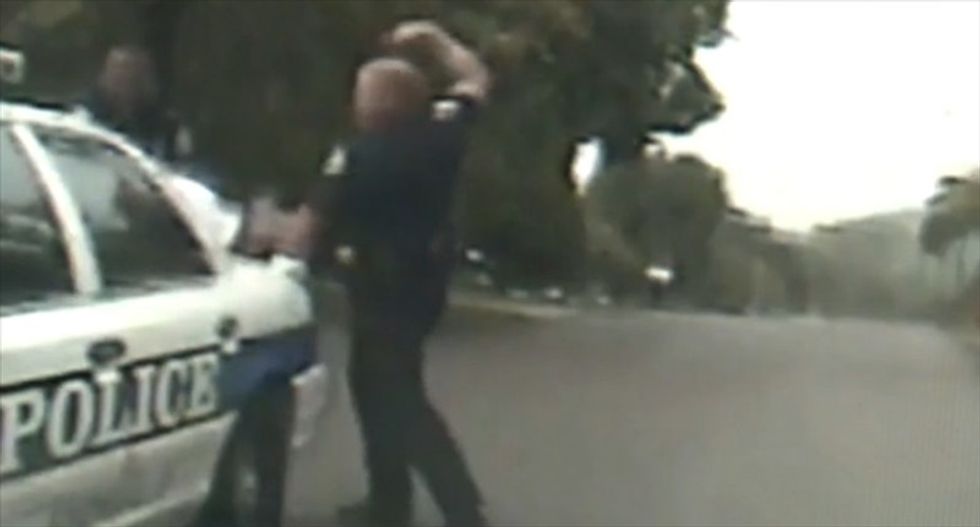 Police in Knoxville, Tennessee responded to a federal civil rights lawsuit by saying one of their officers actually hit a 31-year-old undocumented immigrant with his palm and denying responsibility for his injuries, WBIR-TV reported.

Attorneys for Ernesto Delgadilo Rodriguez filed the lawsuit in response to a July 2014 encounter with Officer Thomas Thurman during a traffic stop that left him requiring a breathing tube, in addition to suffering facial fractures.

Dashcam footage shows Rodriguez lying face down on a police cruiser while Thuman's colleague, Officer Fred Kimber, attempts to handcuff him. Thurman is then seen approaching the vehicle, grabbing Rodriguez, and striking him as Rodriguez yells, before hitting him with his knee.

Authorities said that Thurman was not actually punching Rodriguez, but hitting him with his palm, as per department training. They also said that Rodriguez's injuries came as a result of his face hitting the pavement after being taken down to the ground.

The Knoxville News-Sentinel reported that Rodriguez was hospitalized, then charged with aggravated assault, assaulting officers and resisting arrest. The charges were later dropped "on the expectation" he would be deported. However, Rodriguez continues to live in the area.

Kimber originally encountered Rodriguez while responding to his girlfriend's accusation that he attacked her inside his appartment. According to the lawsuit, Kimber theatened to use his Taser on Rodriguez when he tried to complain about the handcuffs hurting him.

However, the suit stated, hospital records show that Rodriguez was allegedly arrested for "failing to obey a child support order." He was also allegedly put in jail for months and forced to wear a cervical collar.

Watch WBIR's report, as aired on Monday, below.