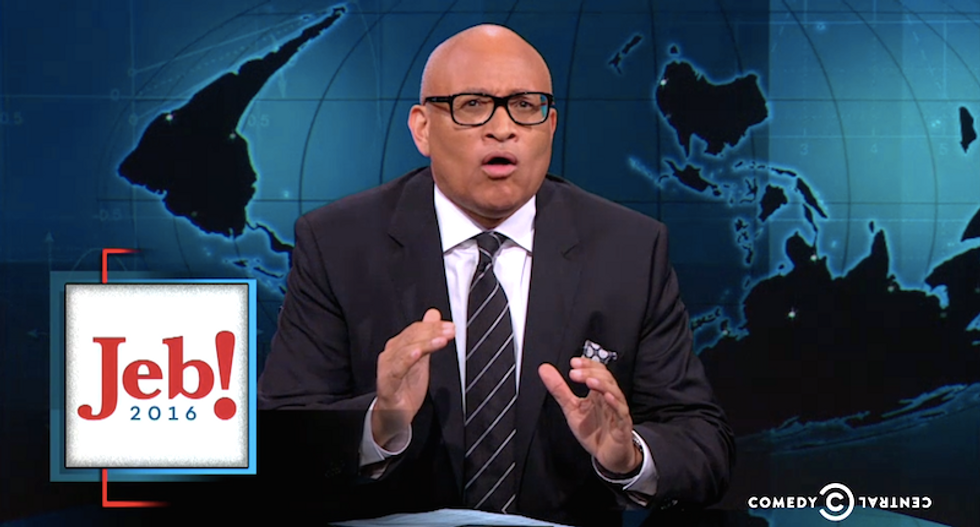 Larry Wilmore took aim at Jeb Bush's "revisionist history" of the Iraq war that deflected blame from his brother -- former President George W. Bush -- to the Democratic frontrunner for president.

The Republican presidential candidate blamed former Secretary of State Hillary Clinton for the failures in that led to the creation of the Islamic State because she withdrew her support for the military surge in favor of a troop withdrawal.

"Whoa, whoa, whoa -- so George is gone and now it's all Hillary's fault?" Wilmore said. "What kind of distorted reality are you living in?"

Jeb Bush also suggested that "rushing away from danger can be every bit as dangerous as rushing into danger" -- a claim the "Nightly Show" host dismissed as absurd.

"That's not a thing," Wilmore said. "You don't run into a house fire and then just take your time getting out."

Wilmore pointed out that Jeb Bush said in May that he would have invaded Iraq, just as his brother had, using the same faulty intelligence -- but the candidate told Fox News that Hillary Clinton would have done the same thing.

"This is unbelievable to me that Jeb-exclamation-f*cking-point-Bush actually had the gall to make it seem like this clusterf*ck in the Middle East was not started by his brother," Wilmore said.

"Basically, your brother took a big stinking dump and didn't flush, broke the toilet, you admit you would have done the same thing, and now you're trying to blame it on the nice lady down the hall who's deleting her emails," he said.