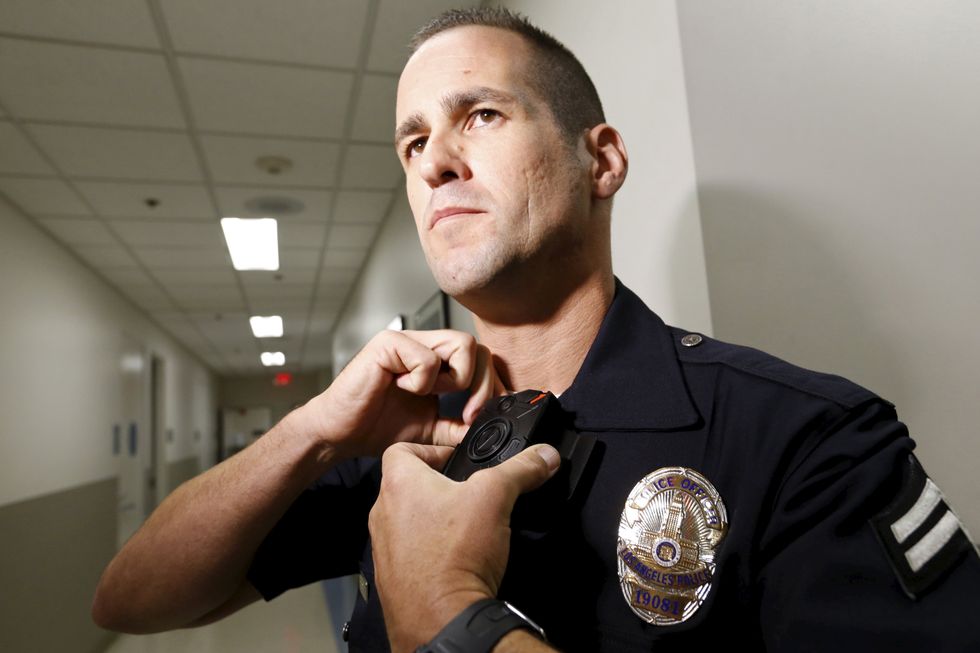 LAPD information technology bureau officer Jim Stover demonstrates the use of the body camera during a media event displaying the new body cameras to be used by the Los Angeles Police Department in Los Angeles, California August 31, 2015. REUTERS/Al Seib/Pool

The Los Angeles Police Department (LAPD) handed out body cameras to its first patrol division on Monday, putting hundreds of the devices on the streets of the nation's second-largest city in a roll-out of technology seen by proponents as key to building public trust in law enforcement.

The move by the LAPD, following smaller pilot programs in New York City and Chicago, came a day after the mayor of Milwaukee proposed spending $880,000 to equip his city's entire force of 1,200 patrol officers with body cameras by the end of 2016.

Many U.S. cities have moved toward supplying body cameras to patrol officers following rising tensions and protests over what many critics see as the indiscriminate use of force by police against unarmed civilians, especially racial minorities and the mentally ill.

The issue has been heightened by a string of highly publicized deadly confrontations, many that bystanders caught on video, between police and unarmed African-American individuals during the past year.

The nearly 9,900-member LAPD is the nation's third-largest metropolitan police force and the biggest to commit to equipping all its patrol officers, numbering about 7,000 personnel, with bodycams.

The American Civil Liberties Union supports the use of police body cams but has criticized the LAPD plan as flawed because the department has not pledged to automatically release footage to the public, even in high-profile shootings. Mayor Eric Garcetti has said the technology will build trust.

The Mission Station in the city's sprawling San Fernando Valley suburb on Monday became the first division to hand out the palm-sized cameras - 800 of them - to its patrol officers, who wear them at the front of their collar and activate them by pressing a button.

The department plans to distribute the rest of the cameras before the end of 2016, said LAPD Captain Jeffrey Bert.

He acknowledged officers may at times make mistakes in using the device.

"Sometimes you jump out of the car in the heat of the moment because you're focused on something else and the last thing you're thinking about is hitting a button on your chest," Bert said. "We anticipate that will happen."

The cost of supplying body cameras, which can run from $350 to $700 apiece, has hindered widespread adoption of the technology in many cities.

Earlier this year, lawmakers in South Carolina passed a bill to require all state and local law enforcement officers to eventually be equipped with bodycams.