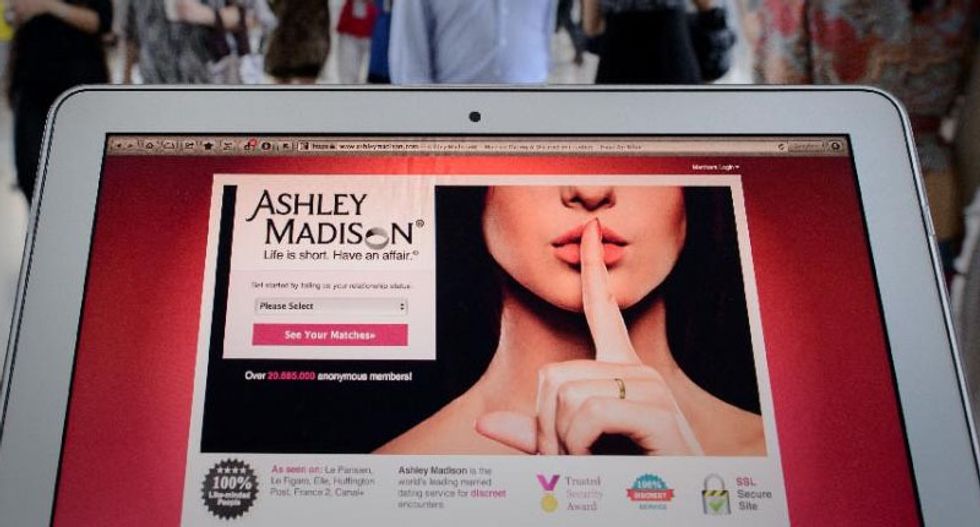 An analysis of the hacked data showed 20 million men had checked messages on Ashley Madison, compared with only 1,492 women (AFP Photo/Philippe Lopez)

If one analysis of hacked data from Ashley Madison is true, the affair-seeker website promoted a lot of talk, but little action.

The news site Gizmodo said its analysis showed little if any activity from the purported 5.5 million female members of Ashley Madison, who were online with an estimated 31 million male subscribers.

The data, which was released on the "dark web" which is not readily accessible to most Internet users, suggests the vast majority of profiles of women on Ashley Madison were fake, or created by automated "bots."

"The more I examined those 5.5 million female profiles, the more obvious it became that none of them had ever talked to men on the site, or even used the site at all after creating a profile," editor Annalee Newitz wrote Wednesday.

The data showed 20 million men had checked messages on Ashley Madison, compared with only 1,492 women. For the chat system, 11 million men logged on but only 2,409 women did so, Gizmodo found.

The Gizmodo team also found that many of the IP addresses for females could be traced back to Ashley Madison itself and that the most popular female last name in the database was "an extremely unusual one, which matched the name of a woman who worked at the company about 10 years ago."

The report said that because women did not pay to join, the only way to get a true sense of the number of active females was to know how many paid to delete their accounts -- a number just over 12,000.

"Paying to delete an account is a sure sign of activity, though of course it's evidence of disengagement rather than the amorous engagement that Ashley Madison promised," Newitz said.

But if true, the data would suggest the website facilitated very few extramarital affairs.

Canadian-based Avid Life has offered a reward of nearly half a million dollars for apprehension of the hackers, who leaked the user data last week including payment transactions, email addresses and phone numbers.

Toronto police have said two suicides may be linked to the data breach, and the leak has stirred considerable concern over privacy and the potential for blackmail.

The release of files came a month after the data was stolen by hackers identified as the "Impact Team," who said they were trying to shut down the site which uses the slogan, "Life is short. Have an affair."