Man accidentally shoots himself at Oklahoma 'Muslim-free' gun range: 'The Clampetts have come to town' 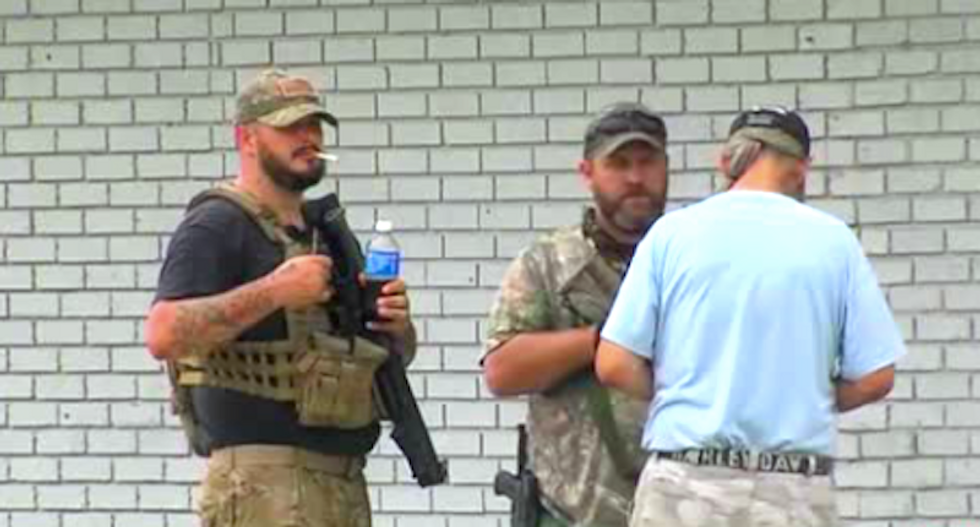 Volunteers stand guard outside Save Yourself Survival and Tactical Gear (KOKI)

A man accidentally shot himself in the arm at a "Muslim-free" gun range in Oklahoma.

A volunteer group of gun lovers and veterans has been standing guard outside Save Yourself Survival and Tactical Gear in Oktaha after the business owners sent out a Facebook alert claiming they received death threats over their ban on Muslim customers.

The man, whose name was not released, dropped his gun -- which fired and struck him in the arm, reported Muskogee Now.

The Muskogee County sheriff said he wasn't surprised someone had been hurt by the volunteer patrol after watching them work, comparing the patrols to the fictional clan from "The Beverly Hillbillies."

"I saw several of those gentlemen out there yesterday," said Sheriff Charles Pearson. "The way they were holding their weapons, with the fingers on the triggers, you can tell a couple of these gentlemen have no idea about weapons safety. It's like the Clampetts have come to town."

One of those volunteers, who claimed to be a combat veteran and would identify himself only as "Eagle One," disputed the sheriff's characterization of the volunteers.

"Don't paint us as ignorant hillbillies," he said. "We just believe in people's constitutional rights, and we're here to make sure they get them."

The man insisted he held no prejudice against Muslims -- despite volunteering to carry a gun to stop Muslims from attempting to do business inside the gun shop.

"I will fight to the death for someone's right to practice whatever religion they want to," the man said. "I'm not here because of that. I'm here because when people start resorting to violence, we can't allow that."

The gun shop's owner set up a sign declaring his business a "Muslim-free establishment" after an Islamic gunman killed five service members last month at military bases in Chattanooga, Tennessee.

Another combat veteran who converted to Islam while serving in the U.S. Navy drove from California to protest the business owner's prohibition.

"I just wanted to come here and express my disapproval," said 49-year-old Chris Martin, who served in Operation Desert Storm. "I'm a veteran, I fought for that right."

Martin's arrival Tuesday stirred alarm among the armed volunteers, who started to chase the Muslim and his daughter off the property until Eagle One stepped in.

"He's cool," Eagle One said, and the other volunteers stood down.

The business owner showed up a short time later and asked Martin and reporters to leave the property, which sits across a highway from a convenience store frequented by neighborhood schoolchildren.

The store was closed Tuesday after the accidental shooting, which the store owner blamed on faulty equipment.

"The gentleman was a close and personal friend of ours, not a guard nor a customer," the store owner said. "He is a very sweet and dear friend who we consider to be like family. He came over today to help fix a door in my office and as he bent over his weapon fell from a malfunctioning chest holster and went off when it hit the floor."

The man is expected to recover from his wounds.