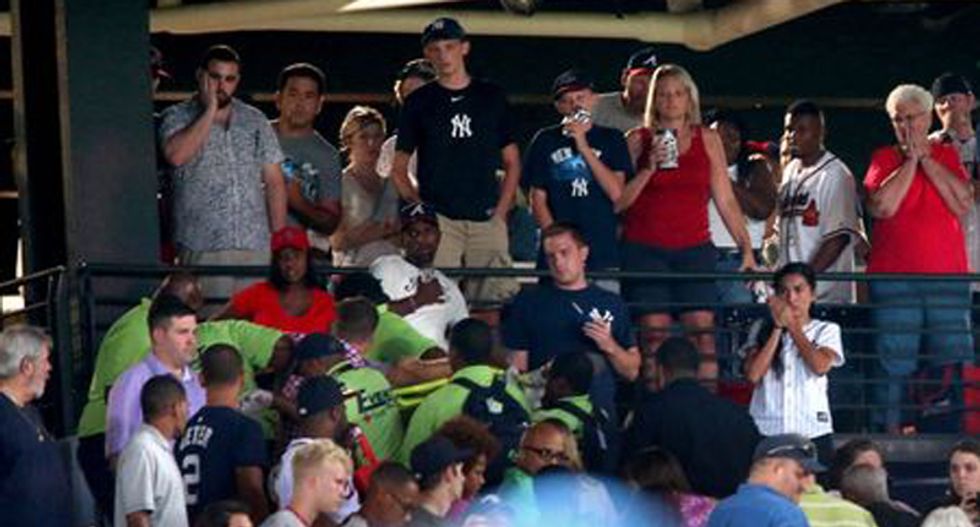 Aug 29, 2015; Atlanta, GA, USA; Spectators react as emergency personnel treat a person who fell from the upper deck in the seventh inning of the Atlanta Braves game against the New York Yankees at Turner Field. Jason Getz-USA TODAY Sports

A baseball fan died on Saturday after falling from the upper level of the stands during a game between the Atlanta Braves and the New York Yankees, the Braves and media said.

"We have received confirmation that the fan involved in an accident at this evening's game has passed away," the Braves said in a statement after the game. "The Atlanta Braves offer their deepest condolences to the family."

A reporter covering the game for Fox News described the incident on-air, telling viewers "Someone just fell over the upper-deck right below us" when the incident happened during the seventh inning.

The fan received emergency medical treatment for about 10 minutes at Atlanta's Turner Field and was given CPR before being taken to Grady Hospital. Police said the unidentified man was in his early 60s, although his name was not released.

Witnesses said the man was shouting at Alex Rodriguez when the Yankees slugger came to the plate, lost his balance and fell about 50 feet below to the concrete.

The game continued while the man, identified by an usher as a season ticket-holder, was treated. No one else was injured.

The fatality was the third at Turner Field.

Disney World workers are subjected to daily harassment -- or worse -- from visitors who refuse to abide by the amusement park's mask mandate.

Florida Gov. Ron DeSantis hasn't issued a mask order to protect against the deadly coronavirus, but the Orlando resort and theme park does -- and many guests become angry when employees tell them they can't wear a gaiter or go without a mask, reported the Orlando Sentinel.