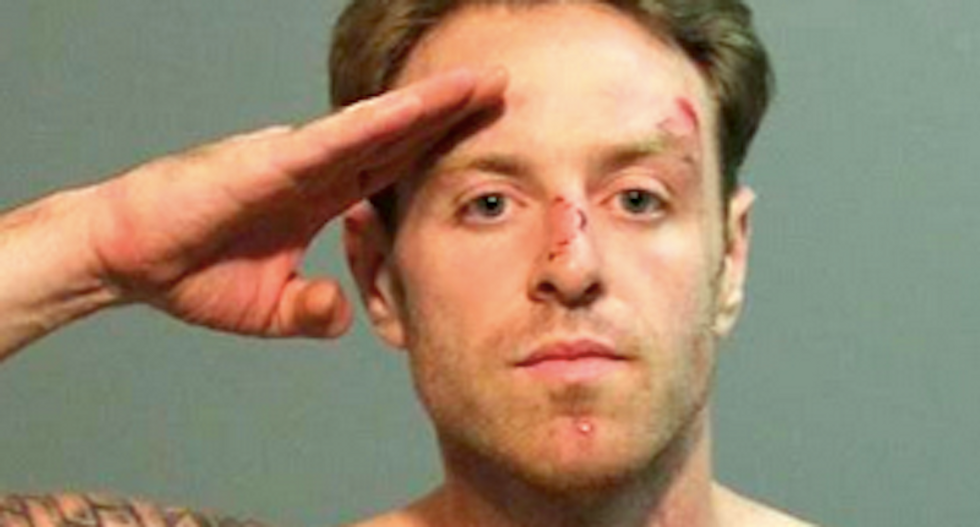 A Massachusetts man was arrested early Tuesday after a bizarre encounter with police in a construction zone.

A police lieutenant said he told a driver - identified as 34-year-old Joseph Parker -- to slow down about 12:30 a.m. as he passed through a roadway under construction in Revere, but he said the Wakefield man immediately became combative, reported the Boston Globe.

“I know why you stopped me,” Parker shouted, and then began complaining about police brutality in Ferguson, Missouri. "F*ck you cops with your guns."

Parker's companions then said he punched the officer "for no apparent reason," and the officer fell backwards and struck his head on the pavement, knocking him unconscious.

Two passengers in the car tried to restrain Parker as he attempted to attack another officer at the scene, and several officers finally subdued him and placed him in handcuffs.

Police said Parker, who had just finished serving a seven- to eight-year prison sentence for cocaine trafficking, tried to kick out the windows inside the police cruiser and kicked "violently and wildly" at officers.

One of the officers used a Taser on Parker, but they said he continued to struggle with police and mimicked them as he was read his Miranda rights.

Parker became violent again at the jail, where he stood in a boxing stance and challenged officers to a fight before rushing toward one of them and punching him in the face, police said.

A booking photo shows Parker shirtless, raising his hand in salute, with some cuts and abrasions on his face.

Officers said Parker appeared to be under the influence during the encounter, and his attorney suggested medication may have caused him to react in an uncharacteristic manner.

Lt. Jeremiah Goodwin, of Revere police, suffered a concussion, and the second officer punched by Parker was treated for minor injuries. Both officers are expected to recover.

Police said he attacked seven officers during the incident.

The incident stands in contrast to several recent cases where black motorists were killed during traffic stops by officers who claimed self defense or died under mysterious circumstances after their arrest on minor violations.