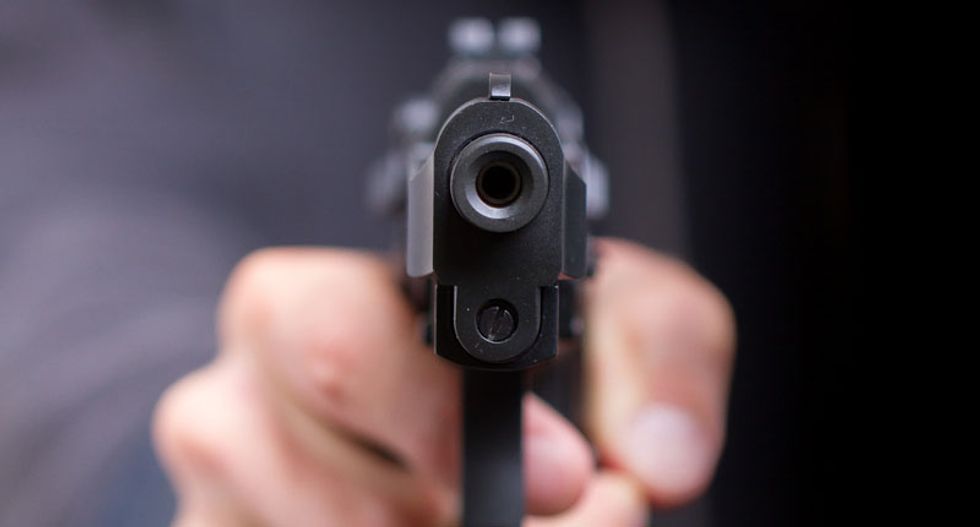 When police officers put on their badges and blues, do they somehow change inside? Surrounded by stories of pepper- sprayed protesters, threats at traffic stops, and sudden bursts of violence sometimes causing deaths , the US has spent a year asking itself about police misconduct, circling the question, “why?”

Psychology may give some clues. For decades psychologists have looked for evidence that weapons affect behavior, and a large body of research has borne out their suspicions: simply seeing a weapon – whether a sword, hand grenade, tank or gun – makes people more aggressive.

Speaking to the Guardian, Ohio State psychology professor Brad Bushman compared the so-called “weapons effect” to humans’ rapid recoil from snakes or spiders, though unlike that impulse the effect must be at some level learned.

“Weapons increase all of those aggressive thoughts, feelings, hostile appraisals and the type of thinking that somebody’s out to get you, or wants to hurt you,” Bushman said.

Aggressive impulses can sometimes be strong enough to override common sense, studies have found. Confronted with a pickup truck driver who had stalled at a green light, drivers in one 2006 study were more likely to honk at the pickup with a rifle than they were at the pickup without a rifle. The study developed a similar 1975 experiment that also included a bumper sticker reading “vengeance”.

“You’d have to be complete idiot to honk your horn,” Bushman said, “but that’s the power about the weapons effect, people don’t think about it much. The effects are very automatic.”

Studies have also shown that carrying a gun tends to make people more likely to deliver electric shocks , increase paranoia about people and objects, and increase testosterone . (The “ vast majority ” of perpetrators of gun violence are men, according to the APA.)

The toolkit of police in America often includes a handgun, Taser and nightstick, and many departments also have the assault weapons, riot gear and armored vehicles that transformed Ferguson, Missouri, into an illustration of militarized police action. The surfeit of weapons probably makes both officers and people around them more aggressive, the experts said, regardless of the type of weapon.

“Tasers can be as deadly as a gun, and the nightstick is not a peaceful tool, it’s used to exercise coercive force,” said Maria Haberfeld, a professor of police science at the John Jay College of Criminal Justice. “A gun is a gun, handcuffs are handcuffs. When officers are in full gear it definitely has an impact on their jobs as opposed to officers without.”

Haberfeld compared police violence in the US to the much lower levels in Ireland and the UK, where police usually go without guns, but she also argued that some gear, and at least the threat of force, is necessary to effective policing.

“A police officer at any moment is outnumbered by members of the public,” she said, “so if we eliminate this implied notion of coercive force then we eliminate the difference between the public and police”.

“In essence, policing as a profession is about the use of force, not necessarily physically but the notion of it.”

Research supports Haberfeld’s assertion that perception affects policing. A 1984 study on the Menlo Park police force, which adopted civilian “ blazer-style ” uniforms for eight years, found that the more casual uniform had no positive effect on the department, and that people thought officers with traditional uniforms “more honest, more active, more helpful”, and even “more ‘good’”.

Researchers have studied the effects of clothing for decades, finding it cues both wearer and witnesses on how to think and feel. Some results are common sense – people judge by appearances – and other results are more subtle.

Style, color and even the type of hat all affect policing, according to University of Toledo psychologist Richard Johnson. Johnson wrote in a 2005 paper that “the crisp uniform of the police officer conveys power and authority” and that civilians cooperate more and misbehave less in the presence of a person in uniform.

“The uniform also serves to establish order and conformity within the ranks of those who wear it by suppressing individuality,” he wrote. “The psychological and physical impact of the police uniform should not be underestimated.”

Just as civilians read aggression into dark uniforms, Johnson notes, so a study has shown that people wearing black uniforms seem to prefer football and rugby to less violent sports. Mixed uniforms of light shirts and dark pants might send the best message, he reasons.

The likely effects of riot gear, gas masks, shields and goggles are not hard to deduce, the experts said: a feeling of anonymity and power , perhaps increasing feelings of aggression and impunity, protected by the symbolic shield of the state and sometimes literal armor.

In turn, civilians (and protesters) are more likely to see the militarized officers as a more threatening force, priming both sides for increasingly aggressive feelings, thoughts and actions.

Even sunglasses, the preferred eyewear of highway patrol everywhere, seem to influence self-perception. A 2010 University of Toronto study found that students who wore sunglasses, perhaps feeling more disguised and thus more powerful, were more likely to cheat on a test or act selfishly than people wearing clear glasses or none at all.

In the absence of an official police killing or abuse database , sheer numbers bear out police and psychologists’ observation that the vast majority of officers do their jobs well and with good intentions.

Most studies note that a variety of factors, including a person’s background and the culture around them, strongly influence actions and perception. Training for instance may mitigate the weapons effect, but it’s not clear how much.

A 2000 study, for instance, put civilians and police in front of a video game in which they had to quickly decide whether to shoot various armed and unarmed men, black and white, as they reached into a bag. Civilians and police were more likely to shoot the black men, but officers showed no racial bias in the case of armed or unarmed killings, a detail the researcher chalked up to training.

Others remain less convinced of training’s efficacy. “My hunch is that it’s not so easy to turn that switch off,” Bushman said.

Haberfeld agreed, adding she believes people who are attracted to policing “have a certain predisposition to aggression”. She suggested a minimum recruitment age for officers of 25 years old, when people are more emotionally and psychologically mature, and more likely to make good leaders.

“I don’t think that everybody who is wearing the uniform should be on the job,” she said, “but here the stakes are a little bit higher. Giving a gun to somebody who’s barely out of their teens is irresponsible.”