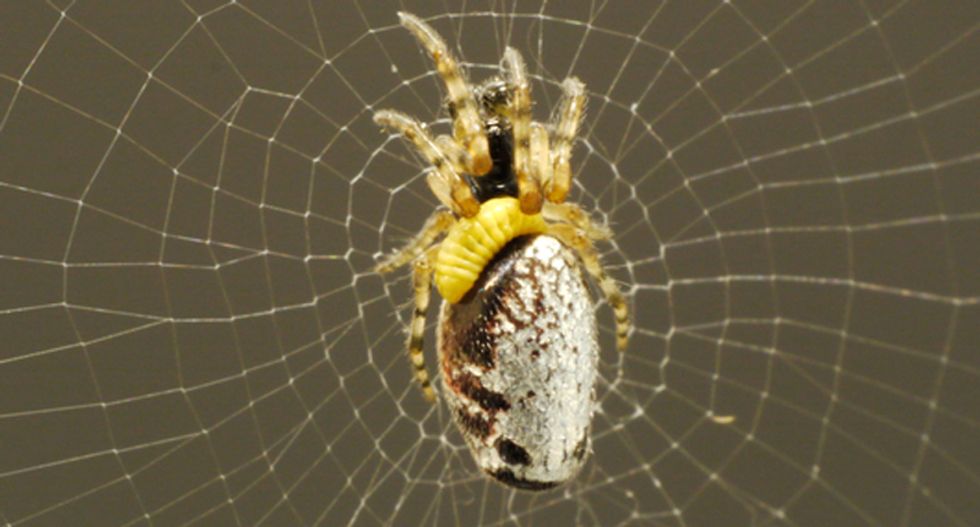 This spider doesn’t know it yet, but he’s about to build a new home for that wasp larva on his back. Keizo Takasuka

People associate wasps with memories of picnic invasions, BBQs under siege, and painful stings. There is a lot more to these much-maligned insects though, and with more than 100,000 different species, their life histories range from the quietly unobtrusive to the bizarre and gruesome. A new study in the Journal of Experimental Biology documents one such disturbing example of wasp larvae that takes control of their unfortunate spider hosts.

The Japanese scientists behind the study thought the host-parasite relationship between the wasp Reclinervellus nielseni (most wasps have only a scientific name) and its orb-weaver spider host Cyclosa argenteoalba could help us understand how parasitic organisms alter their host’s behaviour.

The adult wasps lay an egg on the outside of the spider’s body. The wasp larva hatches out and attaches itself to the spider’s abdomen, where it feeds on the fluids within, while the spider goes about its normal life. At a certain point though, the larva causes the spider’s behaviour to change. It’s as though the larva takes control of the spider and forces it to create the perfect environment for the wasp larva to transform (or “pupate”) into an adult.

Under normal circumstances, this species of spider spins two different types of web: a “normal orb web” that looks like a typical spider’s web with a spiral of sticky thread that is used for catching prey, and a “resting web” which lacks the sticky spiral that is spun just before the spider moults its old exoskeleton.

Orb weaving spider’s webs. A) is a normal web, B) is a resting web, with the moulting spider (inset) away from the hub.

But the parasitised orb-weavers spin a web just before the wasp larvae transform into adults and kill the spider. This “cocoon web” looks very similar to the resting web. In fact, the wasp larvae had induced the spiders to build a modified resting web as it would create a safer environment for the larvae to pupate – just as a resting web creates the perfect conditions for the spider to moult.

C) Normal web made by a parasitised spider, before being manipulated by the wasp larva D) Same spider constructs a cocoon web

To test their theory the researchers observed spiders building webs with and without wasps for company, they examined the structures of the webs and tested the strength of the silk fibres within them. The wasp cocoon webs had similar strength and structure as the regular resting web. They even had similar “decorations” of tiny fibrous threads which reflect UV light which may help to prevent other insects and larger animals disturbing the web, thus increasing the larva’s chances of pupating successfully. They also found that the cocoon webs have extra reinforcement to make them stronger, further increasing the likelihood of the wasp’s survival.

The spiders are forced to abandon their normal behaviour to create the cocoon web, either by altering their normal orb web or by creating one from scratch. The spiders then sit in the middle of the web motionless, until the larvae kill it.

The scientists suggest that this control over the spider could be caused by the wasp larvae injecting hormones into the spider which mimic hormones that control the spider’s moulting behaviour. In effect, the spiders have been drugged by the wasps into doing their bidding.

These “zombie spiders” are particularly spectacular victims of behaviour that is actually fairly common among wasps. The classic picnic-ruiners represent just a small group: the social wasps, those that live in a colony with a queen and workers. But, as with bees, most wasp species are rather different from the ones we normally encounter.

Most wasps are solitary, they are almost all predatory, and many tens of thousands of species are parasites or parasitoids. The difference here is that a true parasite doesn’t usually kill its host or render it sterile (like a flea or tick), whereas a parasitoid always does, and often consumes it too. Almost all adult wasps feed on nectar, but larvae need protein to grow and develop, and so the adults prey on invertebrates like other insects and spiders to feed their young.

Some solitary wasps are kleptoparasites – parasites through stealing – like the cuckoo or jewel wasps. These beautiful wasps lay their eggs in the nests of other wasps or bees. The eggs of the parasite hatch before those of the host, so the parasite larvae can eat the provisions that the host parent left for their offspring, before they get the chance – sometimes they also eat the host egg or larvae.

Parasitoid wasps lay their eggs on or inside the adults, larvae or eggs of host species. Some of these wasps also inject venom into the host organism to immobilise it, some also inject chemicals that protect their eggs from the host’s immune system. Most parasitoid wasps prey on other insects, but many are also specialised to parasitise spiders. Some parasitoids are even used commercially for agricultural pest control – the tiny Trichogrammatidae family attack the eggs of nuisance moths, for instance.

Ellen Dorothea Moss is PhD Candidate in Ecology at University of Hull.