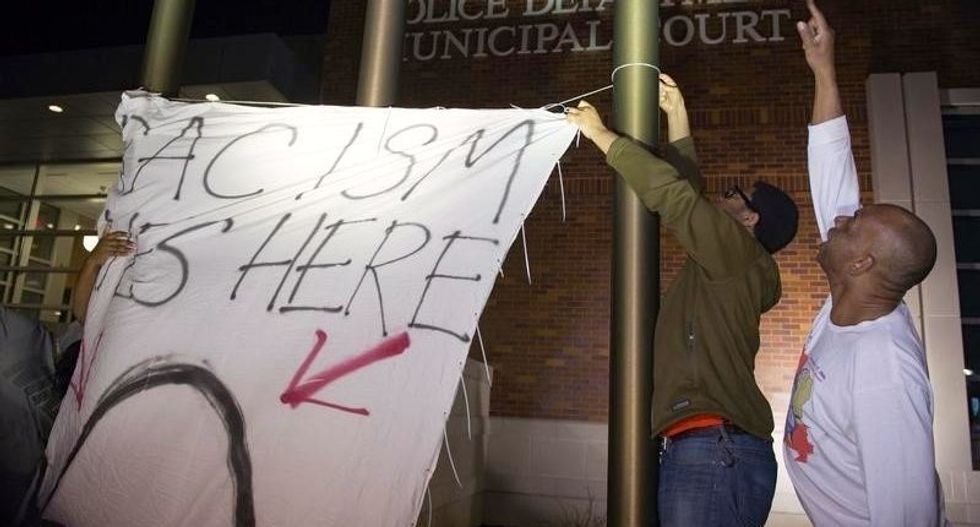 Protesters hang up a flag which reads, "Racism lives here", above a depiction of St. Louis, Missouri, outside the City of Ferguson Police Department and Municipal Court in Ferguson Missouri, March 11, 2015. REUTERS/Kate Munsch

A majority of Americans, white and black, believe that more needs to be done to fight racism in the United States, following a year of protests over the treatment of minorities by police, according to a Pew Research Center survey released on Wednesday.

This includes 53 percent of whites, compared to 39 percent last year. Among blacks, 86 percent say more changes must be made for racial equality, a figure 8 points higher than it was last year, Pew said.

This is the first time since Pew began asking the question in 2009 that it has found a clear majority saying that more needs to be done, said Pew researcher Jocelyn Kiley.

"We are seeing this shift in opinion across the board," Kiley said.

The survey of more than 2,000 adults age 18 and above, conducted from July 14 until July 20, comes at a tense time between U.S. law enforcement and the communities they serve, particularly after grand jury decisions not to indict white officers who killed unarmed black men in Ferguson, Missouri, New York City and other cities.

Pew's survey also found that 57 percent of Americans support the recent decision to remove the Confederate battle flag from the South Carolina capitol grounds after the flag's imagery was used by a gunman accused of killing nine black people in a historic Charleston, S.C. church in June.

While the majority of whites, blacks and Hispanics said the flag's removal was the right decision, Pew said respondents were divided along party lines, with 74 percent of Democrats saying the decision was right compared to 43 percent of Republicans.

Nearly half of Republicans said removing the flag was a wrong decision, according to Pew.

Opponents of the display of the flag have argued that as a symbol of the Confederacy, its display can be seen as condoning that regime's support of slavery and institutional racism.

The survey, which had a margin of error of plus or minus 2.5 percentage points among the total sample of 2,002 adults, was based on telephone interviews with respondents living in all 50 U.S. states and the District of Columbia.