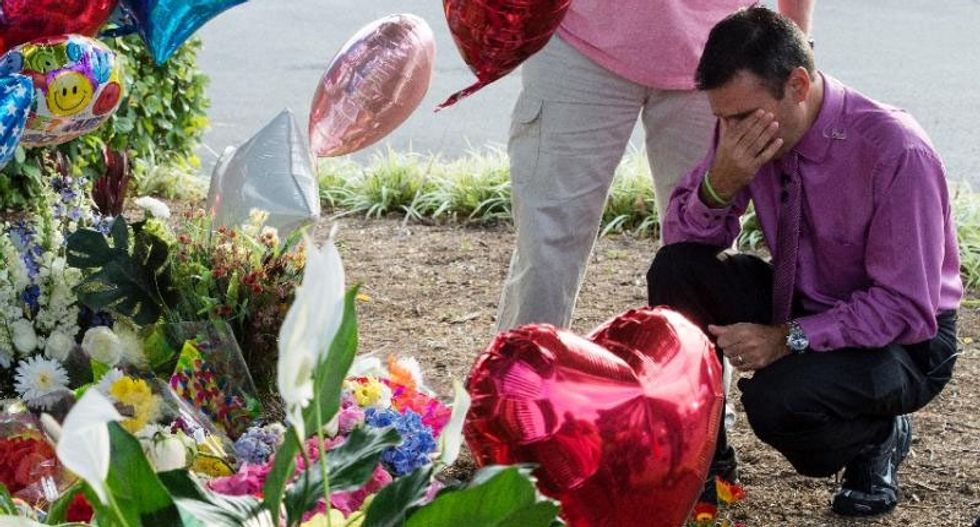 The brazen killing of two US journalists during a live television broadcast by a former reporter fired by the station reignited calls Thursday for tougher gun control in America -- though there was little hope for change.

Mass shootings in the United States -- from the 2012 school massacre in Newtown to June's slaying of black churchgoers in Charleston -- regularly prompt widespread hand-wringing about easy US access to guns, and a need for action.

The killings on Wednesday of reporter Alison Parker, 24, and cameraman Adam Ward, 27, as they conducted an early morning on-air interview for WDBJ -- a CBS affiliate in Roanoke, Virginia -- were no different.

"How many massacres do we have to have... before the public cries out and says what it is that they want us to do?" Roanoke Mayor David Bowers said on CNN. "We just haven't reached a consensus on this in America."

Parker and Ward were shot dead at close range by 41-year-old Vester Lee Flanagan, who was dismissed from WDBJ in 2013 over angry, erratic behavior. Images from Ward's camera as the attack took place were aired live.

The woman they were interviewing was also shot, but was in good condition on Thursday.

Parker's father Andy made an impassioned plea for change, saying his daughter's death had left him heartbroken.

"I'm for the Second Amendment, but there has to be a way to force politicians that are cowards and in the pockets of the NRA to come to grips and make sense -- have sensible laws so that crazy people can't get guns," he said.

"It can't be that hard, and yet politicians from the local level to the state level to the national level, they side-step the issue. They kick the can down the road. This can't happen anymore."

The constitution's Second Amendment -- enshrining the right to bear arms -- is defended tooth and nail by the National Rifle Association (NRA), the main US gun rights lobbying group, which has been successful in blunting drives to restrict weapons sales.

US lawmakers have been hesitant to enact tougher limitations on access to guns, in part because they are loath to anger voters for whom gun rights cannot be abridged in any way.

President Barack Obama made a concerted effort to push gun control legislation through Congress in the wake of the Newtown school shooting, but the draft went nowhere.

"It breaks my heart every time you read or hear about these kinds of incidents," Obama told an ABC affiliate in Philadelphia on Wednesday.

"What we know is that the number of people who die from gun-related incidents around this country dwarfs any deaths that happen through terrorism."

After the Roanoke attack, Wal-Mart said it will stop selling the AR-15 -- the type of rifle used in Newtown and in the Colorado theater massacre -- and other semi-automatic weapons, but cited flagging demand as the reason.

"They should be talking about mental health because there are so many things to be done," Trump told CNN.

Flanagan -- also known as Bryce Williams -- fatally shot himself after fleeing the scene, but not before posting video of the attack on social media.

He sent a rambling manifesto to ABC News, saying he was a "human powder keg... just waiting to go BOOM!!!!" and had endured racial discrimination and bullying "for being a gay, black man."

Flanagan said he was sent over the edge by the Charleston church shooting, carried out by a white gunman who expressed support for white supremacist causes.

WDBJ general manager Jeffrey Marks said that Flanagan's complaints about workplace discrimination had all been shelved, after being "found to be without merit."

"All of these investigations determined that no reasonable person would have taken any of the cited incidents as discrimination or harassment," Marks told a press conference, with dozens of staff members flanking him, many holding hands.

"We will, over time, heal from this," said a grief-stricken morning anchor, Kimberly McBroom, holding hands with two colleagues on the set.

The moment of silence at the station in Roanoke, about 240 miles (385 kilometers) southwest of Washington, came at 6:45 am -- the exact time that Parker and Ward were shot and killed at close range.

Outside the studio gates, bouquets of flowers and shiny remembrance balloons were placed under a tree wrapped with two black mourning ribbons. Viewers and local residents came by to pay their respects.