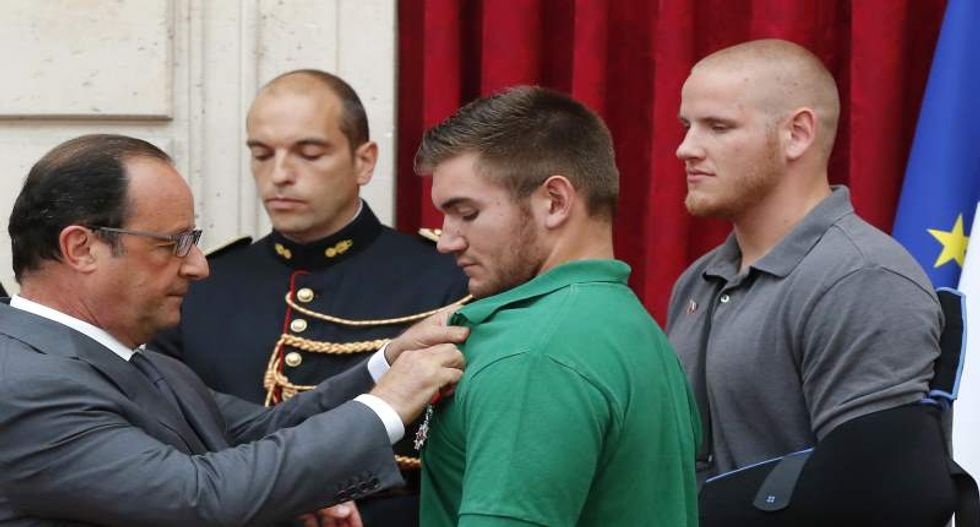 A National Guardsman, one of three Americans who disarmed a gun-toting suspected Islamist militant on a high-speed train in France, will be awarded the U.S. Army's highest non-combat medal, Army officials said on Tuesday.

Specialist Alek Skarlatos, 22, charged accused gunman Ayoub el Khazzani on the train headed to Paris from Amsterdam last week, helping to wrestle away a pistol and an AK-47 assault rifle, and clubbing him on the head with the larger gun, according to the Army.

Two people, including Skarlatos' friend, U.S. airman Spencer Stone, 23, were wounded in subduing Khazzani, who has been identified by authorities as a Morrocan known to European authorities as a suspected Islamist militant.

"Specialist Skarlatos' actions that day epitomize what we mean by a soldier of character - one who lives by a personal code where dedication to duty and taking care of others is sacred," Secretary of the Army John McHugh said in announcing that Skarlatos would receive the Soldiers Medal.

French President Francois Hollande on Monday bestowed France's highest honor on Skarlatos, Stone and 22-year-old Anthony Sadler, awarding them the Legion d'honneur at a ceremony at the presidential Elysée Palace, and U.S. President Barack Obama has hailed their bravery.

The three men, who grew up in the Sacramento area and attended middle and high school together, will get a heroes' welcome and a parade in their hometown, Sacramento Mayor Kevin Johnson said on Monday.

They were touring Europe partly to celebrate Skarlatos' return from a tour of duty in Afghanistan when they noticed Kazzani, who was armed with a Kalashnikov.

They have said they had no choice to but to intervene when Kazzani cocked the rifle.

Stone, whose thumb was almost severed by the attacker, has been credited with saving the life of another passenger who had been shot and was bleeding profusely.

Earlier on Tuesday top Paris prosecutor Francois Molins said he had dismissed Kazzani's claim that he had been planning a robbery and has opened an investigation into "attempted murder with terrorist intent".

Molins said Khazzani, who may have traveled to Syria in the spring, had been identified by the Spanish authorities to French intelligence services in February 2014 because of his connections to radical Islam, before he took a job with a telephone company in France.