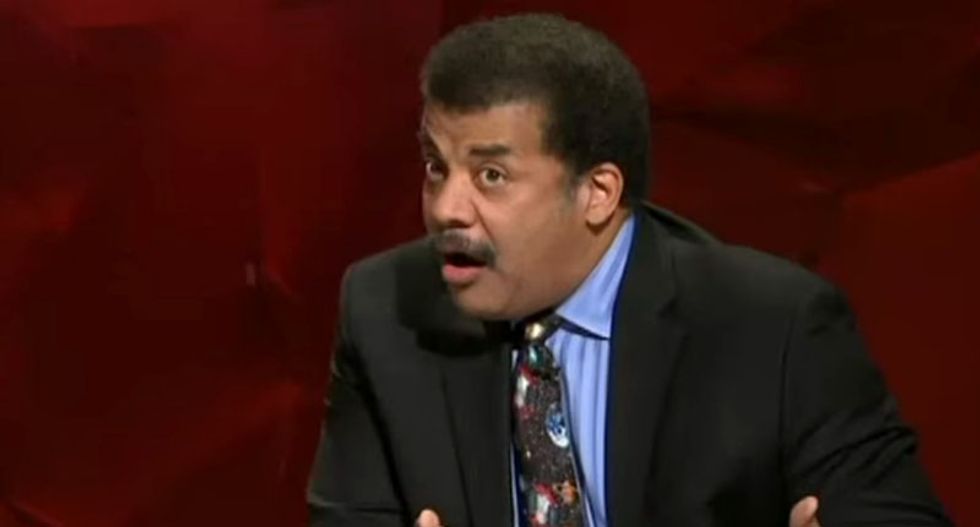 Astrophysicist Neil deGrasse Tyson has a science lesson for white supremacists: You and your hairy brethren are more ape-like than black people.

Monday on the Australian Broadcasting Corporation's Q&A program, Tyson was asked about the racist booing of Australian rules football player Adam Goodes. The vitriol directed at the 35-year-old Indigenous Australian athlete has sparked a debate over racism in the country.

"I’ve got enough race problems in the United States, you know," Tyson remarked.

Goodes, a veteran player for the Sydney Swans, has been jeered by crowds for celebrating goals with an Indigenous dance.

"For example, he is celebrating his score at the end of a game. Correct? I mean, during the game and he does it in a way that's different from everyone else gesturally and, to me, that's a form of freedom of expression, a freedom of speech," Tyson said . "If you don't like that, at some point you have to confess to yourself you're not a fan of freedom of speech and so if you are going to do that, that's a different country from what I understand Australia claims to be. That's A."

Tyson also noted that a 13-year-old girl had called Goodes an "ape" -- and the science popularizer said the girl must have learned the racist slur from her environment.

"B, it was in another occasion in response to this, a 13 year old girl engages him with a comment," he said. "If you’re 13 you just don't say that unless you came from an environment where that’s been said before. That's really weird. In this, the 21st century, for people to be behaving that way, I'm highly disappointed, if I can say."

"You know what she’s done, she’s selectively chosen things about apes that she thinks apply to him and not other things that would apply to people who are white. For example, apes have hair all over their bodies. You have never seen a black person with hair all over their bodies. Black people are some of the least hairiest people in this world! Who are the hairiest? It's white people! With hair on the back, out of the neck. And so if you focussed on hair then you could call white people monkeys, right. It’s all racist conduct."