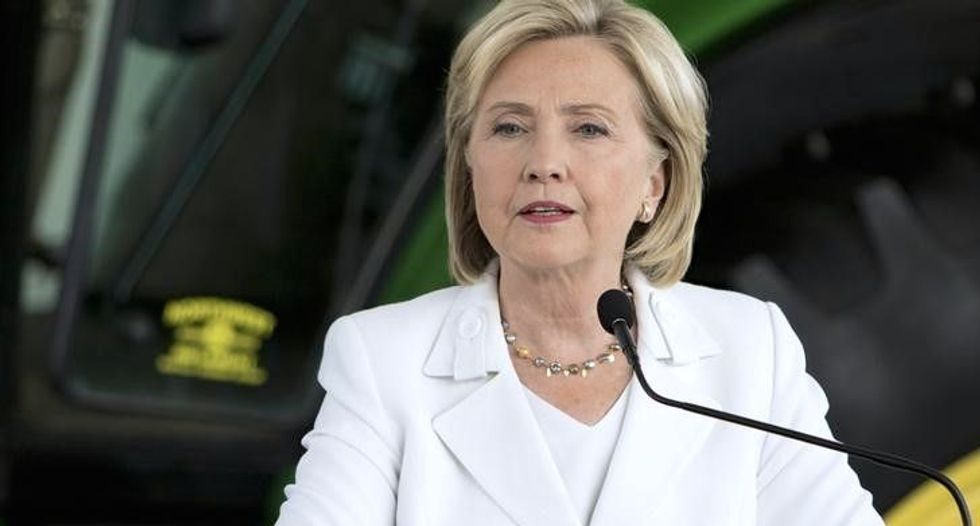 Democratic presidential candidate Hillary Clinton speaks during a press conference after talking about her strategy for rural America during a campaign stop at the FFA Enrichment Center at Des Moines Area Community College in Ankeny, Iowa August 26, 2015. REUTERS/Scott Morgan

About 150 more of Hillary Clinton's work emails have recently been designated as containing classified information, the U.S. State Department said on Monday ahead of the public release of the latest batch of emails Clinton handed over last year.

The department does not know for sure if any information was classified at the time it was sent or received on the private email server Clinton used for work, department spokesman Mark Toner told reporters.

"It's not an exact science," Toner said in a media briefing, where he described the 150 emails as being "upgraded." "When we've upgraded, we've always said that that certainly does not speak to whether it was classified at the time it was sent."

The latest finding brings the total number of Clinton emails considered to contain classified information to more than 200 when prior batches are included.

The U.S. government forbids transmitting classified information outside secure, government-controlled networks. Clinton, the front-runner to become the Democratic Party's nominee for next year's presidential election, has said her use of a private email account connected to a server in her New York home broke no regulations.

She has said she sent no information via email that was classified at the time and received none marked that way.

The Federal Bureau of Investigation now has Clinton's server and is investigating.

Clinton gave the State Department about 55,000 pages of work emails from her four years as secretary of state in December.

Earlier this year, she asked for them to be made public, and the State Department is now releasing them in monthly batches through January.

The latest batch, due to published on the department's website late Monday evening, contains more than 7,000 pages, Toner said. The 150 emails with classified information will have sensitive passages redacted.

In earlier releases, more than 60 emails from Clinton and her senior staff were redacted because they contained classified information, though none was originally marked as classified.

More than half of those emails consisted of a special category of classified information, according to the State Department: information shared in confidence by foreign government officials to U.S. counterparts.

The department's regulations say this information "must" be safeguarded as classified. Asked whether Clinton followed these regulations, Toner demurred on Monday.

"I'm just not going to answer that question," Toner said, citing "other reviews" that were under way. "It's not our goal, it's not our function."