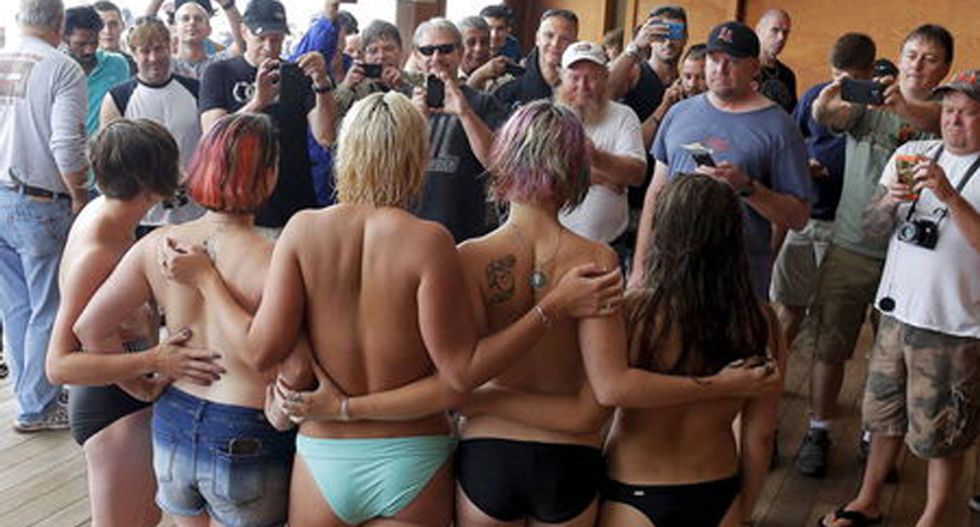 Hundreds of bare-breasted women are expected to converge on a popular New Hampshire beach on Sunday to push for greater acceptance of topless sunbathing, much to the consternation of some local residents and officials.

The event at Hampton Beach was inspired by "Free the Nipple," a 2014 documentary and a movement that seeks to "stand against female oppression and censorship, both in the United States and around the globe," according to an online statement by its proponents.

The gathering also coincides with "Go Topless Day," which is loosely observed in the United States and other countries.

The activists aim to normalize the idea of topless sunbathing in the United States, with some saying it could also make life easier for breastfeeding mothers.

Topless sunbathing is unusual in New Hampshire, as in other U.S. state, although the state statute concerning indecent exposure does not bar the public display of breasts.

Organizers of Sunday's demonstration shed their tops in an initial event last month, prompting a minor outcry among some people at the popular Hampton Beach, which typically teems with families during summer weekends.

According to the Facebook page "Free the Nipple in NH," more than 1,300 people have indicated they will attend Sunday's event.

The push for topless sunbathing is meeting resistance from local and state officials, and one state senator has begun drafting legislation that would allow communities to bar the display of naked breasts in certain areas.

"I don't think we as Americans are ready for some of the exposures we're seeing in other countries," Nancy Stiles, a Republican state senator from Hampton, said in an interview on Friday.

She said the legislation she was considering would allow some areas to be designated family beaches where female toplessness would not be allowed, while other areas could be open to topless bathing.