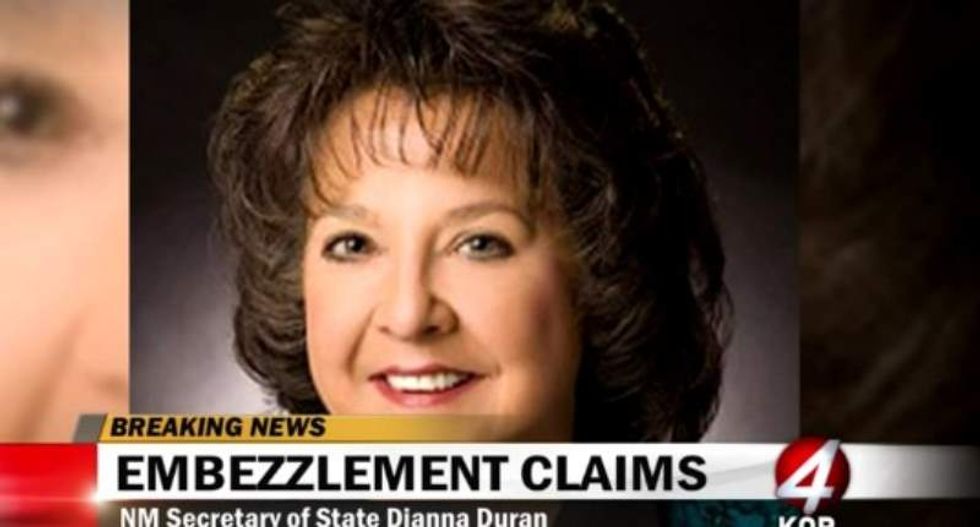 A spokesman for Attorney General Hector Balderas said in a statement his office would provide evidence to support the allegations through a preliminary hearing. Spokesman James Hallinan declined to release further information on Friday.

Duran's attorney, Erlinda Johnson, told the Albuquerque Journal newspaper in a statement they had just received the complaint and were reviewing it.

"We ask the public not to jump to conclusions, and we look forward to addressing the allegations in court," Johnson said, according to the newspaper.

A copy of the complaint was published online by broadcaster KRQE but bore the stamp of the first judicial district court of New Mexico in Santa Fe.

The complaint said Duran misused campaign contributions for personal expenses, adding that the investigation was sparked by a tip that she deposited large amounts of money into her personal bank account that did not line up with her known income streams.

The complaint said funds were then transferred between her personal and campaign-affiliated accounts, culminating in "large debits for cash expenditures occurring at casinos throughout the state of New Mexico."

The complaint said more than $430,000 was withdrawn from Duran's bank accounts from eight casinos between 2013 and 2014, roughly as much as she reported on her joint tax returns from 2010 to 2013 combined.

In addition to embezzlement, money laundering and violations of the state's Campaign Practice Act, the complaint includes charges of fraud, conspiracy, tampering with public records and government misconduct.

The criminal case marks an escalation of tensions between Balderas and Duran over the reporting and enforcement of state campaign finance laws.

Watch a report on the charges against Duran, as aired on KOB-TV, below.