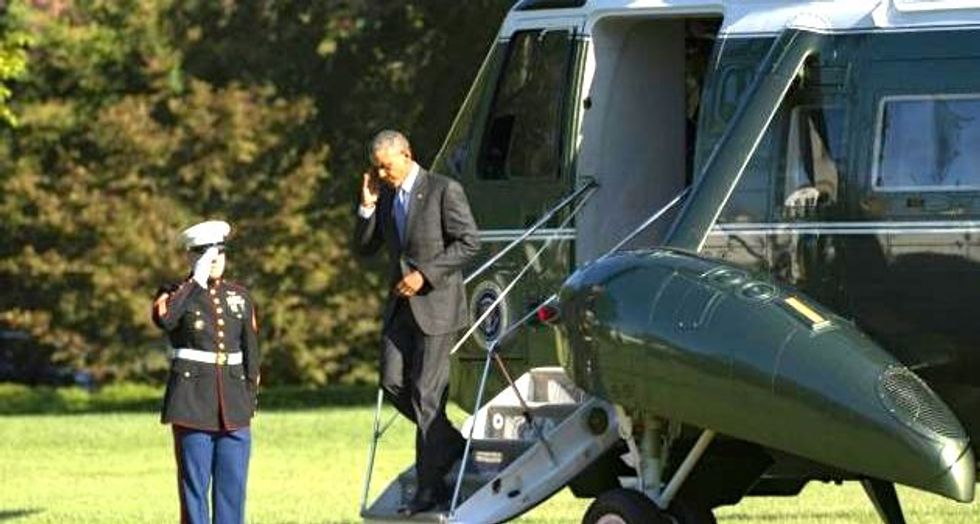 AFP/AFP/File - President Barack Obama arrives at the White House on August 25, 2015 in Washington, DC after a trip to Las Vegas for a speaking engagement

Obama will travel to Louisiana to mark the rebirth of a city eulogized by Tennessee Williams as the "last frontier of Bohemia," but which in August 2005 became a Hobbesian dystopia of death and looting.

"If you think about nine and a half years ago, I don't think anybody would have envisioned the dramatic progress that the city of New Orleans has made," said White House spokesman Josh Earnest.

"It is an opportunity to celebrate the remarkable revival of an American city."

More than 1,800 people were killed and one million others displaced when Katrina barreled in from the Gulf of Mexico, destroying levees and submerging 80 percent of the city in effluent-tainted storm water.

Americans -- almost congenitally imbued with optimism and a sense of invulnerability -- watched shocked as stranded survivors waited day after day on rooftops for government help that was painfully slow to come.

The implicit contrast is between his administration's efforts to get New Orleans back on its feet and George W. Bush's initial vacillation.

The storm surge scarred the city, but also forged a high watermark of criticism of Bush's administration.

A photograph of a concerned but detached president Bush viewing the damage from Air Force One has become emblematic of the politics of the crisis.

"I prided myself on my ability to make crisp and effective decisions," Bush later wrote in his memoir.

"Yet in the days after Katrina, that didn't happen. The problem was not that I made the wrong decisions. It was that I took too long to decide."

But Obama risks looking similarly out of touch if he too strongly talks up New Orleans' recovery.

That message "would resonate more with the city's white residents than with its black residents," said Michael Henderson, of Louisiana State University.

According to a recent LSU poll, the vast majority of white people in the city believe Louisiana has mostly recovered from "the storm."

Three in five black residents say it has not.

Strong local support for Obama and his Democrats will prevent a backlash, even if his message "does not fully mesh with many residents' own views or experiences," said Henderson.

As a senator Obama told a Baptist Church in New Orleans that the government had failed the region even before Katrina. There are signs history may be repeated.

While the last decade has seen an influx of wealthy new residents to New Orleans, many complain that gentrification has left them by the wayside, transforming public schools into charter schools and pushing housing beyond reach.

Ten years on, like the rest of America, the gap between rich and poor -- and often white and black -- has only grown.

In New Orleans that threatens to fray the unity and resolve that fueled the recovery.

The Guardian reported Tuesday morning that some Democrats are starting to get scared after Republicans threatened they'd investigate Dems if the Jan. 6 committee subpoenas GOP members of Congress.

"Republicans in Congress have openly floated the prospect in recent days of launching political investigations into the Biden administration’s coronavirus response, the withdrawal from Afghanistan, the personal life of Biden’s son Hunter, as well as an impeachment inquiry," said The Guardian.